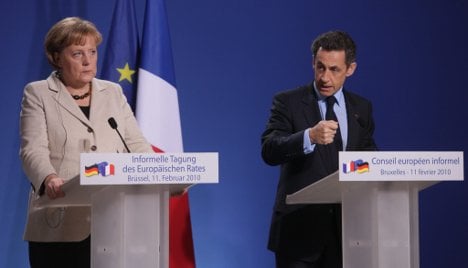 The claim came as European Central Bank President Jean-Claude Trichet pointedly suggested Germany should take a leadership role in ensuring the fiscal management of its neighbours in the wake of the Greek crisis.

According to El Pais newspaper, Spanish Prime Minister Jose Luis Rodriguez Zapatero told a meeting of his Socialist Party this week that Sarkozy had made the threat at a Brussels summit of EU leaders last Friday, at which the deal on a rescue package was sealed.

Spain, France and Germany all denied the report, but it increased investors’ concerns over the euro single currency, which plunged to an 18-month low on Friday.

Germany, Europe’s biggest economy, has been the most reluctant euro nation to help the Greek government.

However the French president demanded “a commitment by everyone, for everyone, to help Greece, each according to his means or France would re-examine its situation in the euro,” Zapatero was quoted as saying.

“Sarkozy banged his fist on the table and threatened to withdraw from the euro, which twisted the arm of Angela Merkel,” a Socialist official who heard Zapatero’s account was quoted as saying.

The Brussels summit finally agreed a €110 billion, three-year package of loans and credit guarantees for Greece, which had risked defaulting on its huge debts.

“France, Italy and Spain put up a common front against Germany and Sarkozy went so far as to threaten to break the traditional Franco-German axis,” according to another person at the meeting. France and Germany are traditionally considered the central motor of EU initiatives.

Meanwhile Trichet, the French boss of the ECB, told financial daily Handelsblatt that Germany was an example of fiscal responsibility and therefore was well-placed to perform a monitoring role of other European nations. He said the ECB, the International Monetary Fund and the European Commission would all be watching closely to make sure Greece stuck to its promised austerity measures, but national governments – notably Germany – also had to play their part.

“Germany is the largest economy in the euro area and a country which has a tradition of sound fiscal management. I count on the very active role of all countries including Germany insert the function of surveillance,” Trichet said, according to a transcript of the interview posted on the paper’s website.

The ECB announced Monday that it would buy government bonds, which helped calm markets jittery about the continent’s debt crisis.

Asked whether the 16-nation eurozone has to face inflation as a result of the bond purchase program, Trichet replied: “No, not at all.”