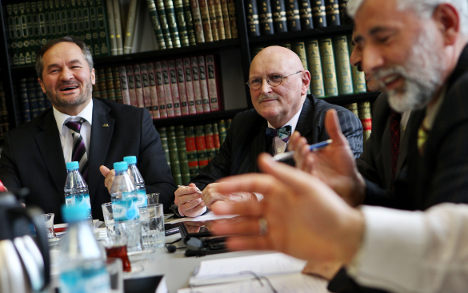 Köhler, second from left, and members of the ZMD. Photo: DPA

The Central Council of Muslims in Germany (ZMD) made its surprise announcement Wednesday after several discussions with the Interior Ministry.

“In all of our contacts, we are simply coming up against a brick wall,” said chairman Ayyub Axel Köhler.

The German Islamic Conference between the federal government and Muslim groups is intended to set policies about Islam in Germany for the next three years, with an emphasis on improving religious and social integration of the country’s sizeable Muslim population.

Köhler had hailed the first conference, held in 2006, under then Interior Minister Wolfgang Schäuble, a great success.

Köhler stressed the council had come to its difficult decision only after weeks of consideration. But the council was upset that half the 2,500 Mosque-centred communities were not going to be represented at the conference and that the ministry had “gone over the heads of Muslims,” in deciding the themes and constitution of the conference, he said.

The council felt it was “a conference decreed by the federal government” that would be neither binding nor authoritative and therefore amounted to a “debating club.”

The key issues for Muslims were discrimination and Islamophobia.

“We are distressed that there is fear in the community leveled against us. All of this must be central to the political agenda, and that includes hostility to Islam. But all that was ever said to us was: ‘Yes, yes, that will be brought up, we’ll put it under the theme of extremism.’”

“They didn’t want to accommodate us at all. An uneasy partner is now gone,” Köhler said.

But de Maizière has stressed he wanted the conference to focus on “practical questions about how the mainstream community and Muslims live together.”

“The withdrawal of the ZMD is regrettable,” he said, while adding the conference would still be well-attended and would reach the goals that had been set.

“The new meeting of the Islamic conference has failed before it has begun,” he said.