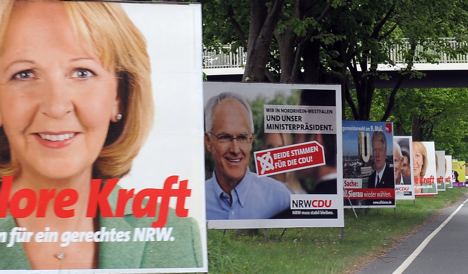 Just two days after the German parliament approved an unpopular three-year loan package for Athens worth billions of euros, some 13.5 million voters in the western region of North Rhine-Westphalia (NRW) elect a new legislature.

A reverse for Merkel could cost her the majority in the upper house of parliament, giving her opponents the power to block several promised reforms including sweeping tax cuts she hopes will invigorate Europe’s top economy.

And the most recent opinion polls showed that the €22.4 billion euros (28.4 billion dollars) in aid for Greece could punish Merkel’s conservatives, who have governed NRW with the pro-business Free Democrats (FDP) in 2005.

The two parties, also in coalition at a national level, are poised to win between 43 to 45 percent of the vote, according to polls.

The rival centre-left Social Democrats (SDP), who held power in the state for four decades until 2005, and their preferred partners, the Greens, are polling between 45 and 47 percent.

Greece was certainly to the fore in the final hours of campaigning, with the conservative candidate, Jürgen Rüttgers, seeking desperately to defend the bailout in an industrial region that has itself has been hit by recession.

On the other hand, the SPD abstained in Friday’s parliamentary vote, a tactical move that analysts said could pay off in NRW. A YouGov poll published in mass circulation daily Bild on the eve of the election showed that the bailout would affect how one in five NRW voters cast their ballot.

Beyond control of the NRW state legislature, the dominance of Merkel’s coalition in the Bundesrat upper house also hangs in the balance. The conservatives and the FDP currently hold 37 of the 69 in the Bundesrat, just over the 35 needed for a majority. Losing NRW would deprive them of six seats and risk bringing their plans to a shuddering halt.

“Scarcely one of the big projects that the conservatives and the FDP promised seven months ago in their coalition agreement will – if the polls are correct – survive this Sunday,” wrote the Tagesspiegel am Sonntag weekly.

Bild am Sonntag said the vote was a “day of fate” for Merkel, adding that

policies such as a drive to slash taxes by 16 billion euros by 2012 were doomed if her party lost.

Political scientist Gerd Langguth of the University of Bonn said that life had been on hold in Germany, politically speaking, until this vote took place.

“For months, federal politics has been nearly at a standstill because all decisions have been taken with a view to this election, or postponed until after it takes place,” he said.

Ballot boxes in the state opened at 0600 GMT and are due to close at 1600 GMT, when exit polls will be released.