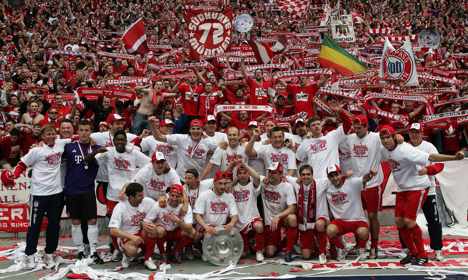 Having taken Bayern’s helm in July 2009, Bayern Munich coach Louis van Gaal is now one step closer to the treble with the German Cup final still to come against Werder Bremen on Saturday before the Champions League final on May 22 against Inter Milan.

Van Gaal admitted he was delighted his side dominated the German league this season after he collected his third national league title with four different teams.

Having won the Dutch league with Ajax in 1994, 1995 and 1996, Van Gaal won the Spain’s La Liga twice with Barcelona in 1998 and 1999 before winning last season’s Dutch title with AZ Alkmaar and now the Bundesliga with Bayern.

“It matters to me that we were best in everything this season,” said Van Gaal as Bayern won their 22nd German league title. “It is good that we won here: it means we keep the winning rhythm, which is important for our big games yet to come.”

“We have the most points, but also the best defence and the best attack,” the Dutchman added. Bayern lost just four league matches this term, the best record in the Bundesliga and their 20th victory on Saturday was another league best.

Munich collected 44 yellow cards all season, the lowest number in the Bundesliga and scored the most league goals with 72.

Having forged Munich’s array of stars into a formidable unit this season, pay-back time came in Berlin shortly after the final whistle as Bayern’s squad, armed with huge glasses of beer, hunted the coach to give him a soaking.

Tradition decrees in Germany that the coach of the winning Bundesliga team is drenched in beer after the final whistle on the last day of the season and the Dutchman was no exception.

Van Gaal finished the festivities drenched as captain Mark van Bommel emptied his glass over him. “Five or six of them came after me, I did quite well initially, I wasn’t completely soaked,” said the 58-year-old.

“But I dropped my guard a little, and they came back at me. It’s wonderful.”