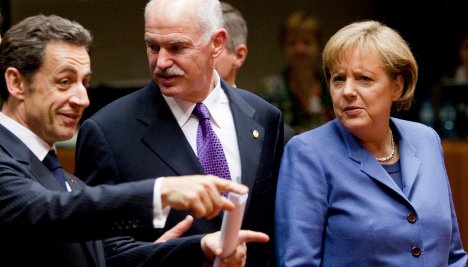 European nations must agree on improved surveillance and on tighter sanctions for those countries that fail to keep their deficits under control, the leaders wrote in a joint letter published on Thursday.

The eurozone must also put in place a “robust framework” for dealing with crises to avoid a repeat of the €110-billion ($143 billion) bailout for Greece from Europe and the International Monetary Fund, they added.

“For economic and monetary union to remain a success story, dealing with this crisis alone will not suffice,” the leaders wrote in a letter to EU’s President Herman Van Rompuy and Jose Manuel Barroso, head of the European Commission executive.

“We need to go further in drawing all the lessons and in taking all necessary measures to avoid a repetition of a crisis of this kind,” they said, urging tighter controls, especially over speculation and derivatives trading.

Leaders of the euro countries gather for a summit in Brussels on Friday amid fears that the common currency is under threat unless the debt-ridden region can enact profound reform.

“We must first reinforce the economic governance of the euro area,” Sarkozy and Merkel wrote, citing an existing agreement by European countries to set up a “task force” for boosting legal controls.

They added that eurozone leaders must also work to improve the reliability of statistics, which they said were partly to blame for the Greek crisis. They also urged leaders to examine the role credit of ratings agencies, citing a downgrade of Greece’s rating which shook markets just before an EU aid package was announced.

The letter avoided referring openly to proposals that have gained weight recently for a new system for countries to have their annual budgets reviewed by fellow eurozone members.

During Friday’s meeting, the second such eurozone summit in the currency’s 11-year history, the leaders will sign off on a multi-billion-euro Greek bailout package and look at ways to try and prevent any repeat of the crisis.

The euro on Thursday dived to the lowest level against the dollar for more than a year.

“The Greek government has committed to taking courageous measures,” Sarkozy and Merkel wrote. “We fully support its determination and we are convinced that it will allow Greece to address its fiscal and economic challenges and restore market

But Germany, quick to lecture Greece over its debt crisis, has considerable

fiscal problems of its own, as evidenced by new tax revenue forecasts released on Thursday.

Figures from the Finance Ministry showed that tax receipts over the period 2011 to 2013 would be almost €39 billion ($50 billion) less than predicted last year.

Europe’s biggest economy now expects to borrow around €80 billion this year and to spend far more than it earns. Its budget deficit is forecast by Brussels to reach some five percent of gross domestic output (GDP) this year, well above the three percent limit set out in the 27-nation bloc’s fiscal rule book.

Greece, by comparison, is forecast to record a deficit of 9.3 percent of GDP, according to forecasts this week from the European Commission. Portugal’s is seen at 8.5 percent and Spain’s at 10.2 percent.