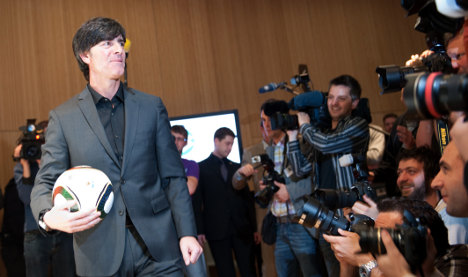 Löw announced Thursday he had opted to take Bayern’s rising stars forward Thomas Müller and uncapped 21-year-old defender Holger Badstuber, along with Butt, who turns 36 at the end of the month from Munich.

Butt won the last of his three caps in 2003, but has been in stellar form for Bayern, who are set to win the Bundesliga title on Saturday and are in the Champions League final at the end of the month.

Chelsea midfielder Michael Ballack will captain the side in South Africa and is just two caps from making his 100th appearance for Germany.

There is no place in the squad for Lazio midfielder Thomas Hitzlsperger, while Bayer Leverkusen pair goalkeeper Rene Adler and midfielder Simon Rolfes are missing with injury.

Löw’s first-choice goalkeeper Adler is out with a rib injury which needs an operation and Löw has opted to replace him with Butt to contest the Number One shirt alongside Schalke’s Manuel Neuer and Bremen’s Time Wiese.

But there has been no decision on who will be in goal for the World Cup.

“We will talk about it and decide probably at the end of next week,” said Löw.

But the Germany boss said there was no chance of ex-Arsenal goalkeeper Jens Lehmann being called up.

“That discussion was not an issue for us,” said Löw.

Löw revealed he had found it hard to leave out experienced midfielder Hitzlsperger with promising Bremen youngsters Marko Marin and Mesut Oezil being chosen.

“This was a very difficult decision for me,” said Löw at the Stuttgart press conference. “Thomas has never disappointed us and made a key contribution in helping us qualify.

“He is a reliable player, but he barely played in the last few months before he left Stuttgart and has also played very little at Lazio.”

Hamburg defender Dennis Aogo is a surprise selection in the 27-man squad which will be reduced to 23 on June when the final squad is submitted.

Both Cologne’s Lukas Podolski, voted the best young player at the last World Cup, and Bayern Munich’s Miroslav Klose, the top-scorer at Germany 2006, have been named amongst the forwards along with 20-year-old Müller.

Germany face warm-up games against Malta in Aachen on May 13, Hungary in Budapest on May 29 and Bosnia-Herzegovina in Frankfurt on June 3.

With Werder Bremen facing Bayern Munich in the German Cup final on May 15, Ballack, whose Chelsea team faces Portsmouth in the FA Cup final the same day, and the Bremen players will join the Germany squad in Sicily after May 15.

The seven from Bayern will join the national squad in their second training camp in the southern Tyrol Alps after the Champions League final on May 22 against Inter Milan in Madrid.

Germany have drawn Australia, Ghana and Serbia in Group D for the World Cup which starts on June 11 and they open their campaign against the Australians on June 13 in Durban.

Löw has also named a separate group of five fringe players who will be brought into the Germany squad only for next Thursday’s warm-up game with Malta.