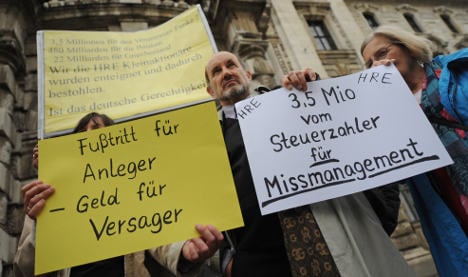 Georg Funke, fired in December 2008 as chief executive of the now nationalised Hypo Real Estate (HRE), is claiming €3.5 million ($4.5 million) in lost salary and the right to a pension of €47,000 per month.

HRE collapsed in late 2008 as the global financial system lurched towards near collapse following the bankruptcy of Lehman Brothers after HRE’s Irish subsidiary Depfa lost heavily on risky investments in the United States.

In a desperate attempt to prevent Funke’s HRE causing an implosion of the entire German banking sector, Chancellor Angela Merkel’s government cobbled together a state-led rescue of the bank worth more than €100 billion.

The 55-year-old, whose contract had been due to run until 2013, brought his claims before a court packed with former HRE shareholders in Munich, southern Germany, on Thursday.

“Morally speaking this is a disgrace,” said HRE shareholder Bohdan Kalwarowskyj, who said he lost €20,000 that he had invested on behalf of his four children in 2007.

Ulrike Struzek, who saw €160,000 invested in HRE shares for her disabled child go up in smoke, said in a letter to Funke: “It is time for you to accept your misconduct. Do something to repair some of the damage.”

Franz Josef Wagner, a commentator in the Bild mass-circulation daily, told Funke to go out and get a job as a cleaner or a nightwatchman: “Move out of your villa and make amends. You haven’t earned a pension.”

Funke’s claim has echoes of the case of former Royal Bank of Scotland (RBS) head Fred “the Shred” Goodwin in Britain whose £700,000 (€825,000) pension sparked public anger.

Goodwin, who came to symbolise the “fat cat” greed of bankers blamed for the worst financial crisis in generations, and whose Edinburgh house and Mercedes car were vandalised, eventually agreed to a 40-percent pension cut.

RBS posted in 2008 the biggest ever loss in British corporate history – £24 billion – was part-nationalised and is now 83-percent owned by the British government.