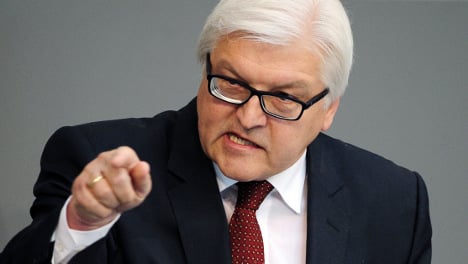 The Social Democrats’ (SPD) parliamentary leader, Frank-Walter Steinmeier, told a special party meeting Thursday morning that the party’s MPs would abstain from the vote on the package unless the government addressed its concerns about the €22.4 billion deal.

His remarks came as three people were reported killed during rioting on the streets of Athens.

Daily Süddeutsche Zeitung, meanwhile, citing modeling from the Bundestag’s own budget committee, reported the package could end up costing Germany more than the €22.4 billion currently forecast.

her handling of the Greek crisis, just days before a key regional election.

Just less than half (48 percent) of German voters said they would directly elect her again as chancellor, a drop of six points from the previous week, the Forsa Institute poll for Stern magazine said.

Critics have accused Merkel of dragging her feet over Germany’s slice of the €110-billion, three-year bail-out package for Greece.

In Germany, the electorate votes for parties, rather than individual candidates.

But support for Merkel’s conservatives fell by two percentage points to 34 percent, while her coalition partners, the pro-business Free Democrats, held firm on eight percent.

On the other hand, the centre-left SPD gained one point to 25 percent while the Greens rose two points to 16 percent.

The far-left party, Die Linke, dropped one point to 10 percent in the poll of 2,501 people conducted between April 26 and 30.

“Unlike in the banking crisis a year and a half ago, the chancellor has not been a rock of stability, giving people confidence and direction in the crisis,” Forsa chief Manfred Güllner said.

On Sunday, Merkel’s coalition face an uphill struggle to hold on to their five-year-old alliance in a regional election in Germany’s most populous state of North Rhine-Westphalia.

Defeat for the coalition could spell the end of Merkel’s majority in the upper house of parliament.