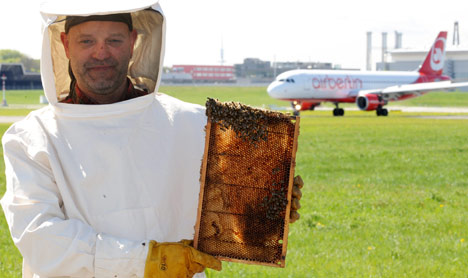 An airport spokesperson said on Wednesday that in addition to producing honey, the some 120,000 buzzing bees will also perform what the airport calls “bio monitoring.”

Tended by an airport apiarist, they simply go about their normal insect activity, but in the process will reveal a lot about the air quality where hundreds of planes take off and land each day.

The bees gather nectar and pollen from nearby plants exposed to any air pollutants at the runways, and the honey they make subsequently reveals any contaminants to experts.

This will be the 11th year that the colonies have been “monitoring” air quality. The Hamburg-Fuhlsbüttel Airport became the first European airport to begin an apiculture project in 1999. Several other German and European airports have since followed their example.

So far past harvests – which yield about 150-kilogrammes of honey – have been clear of contaminants that would be dangerous for human consumption and measured up to food safety standards.

The airport gives the surplus honey away as gifts at special occasions.