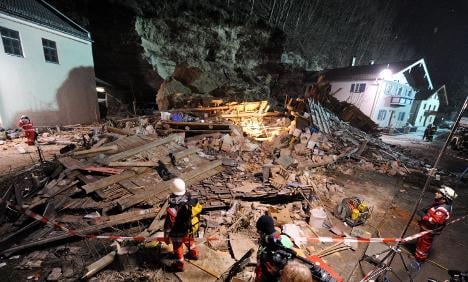 The naturally occurring cavern in the town of Stein an der Traun had been used as a cellar, but also had a “major mechanical effect” on the rock fall and must be considered the cause of the accident, geological engineering Kurosch Thuro told daily Passauer Neue Presse.

The University of Technology Munich professor conducted a study on the deadly event for the local public prosecutor’s office, and plans to present the full results soon, the paper said.

According to Thuro, the cavern behind the home was about six metres deep and as tall as a man in some places. But behind the cavern, where the house-sized boulder was located, the engineer said he believes a crack developed over the course of more than 100 years.

“The causes of the rock slide began a very long time ago,” he told the paper.

Two people – a 45-year-old father and his 18-year-old daughter – were crushed when the enormous rock landed on their family home after falling from a 15-metre hillside above. The other two members of the family, the man’s 40-year-old wife and 16-year-old son, were severely injured in the accident.

The family was reportedly together in the same room when the boulder surprised them around 7:40 pm.