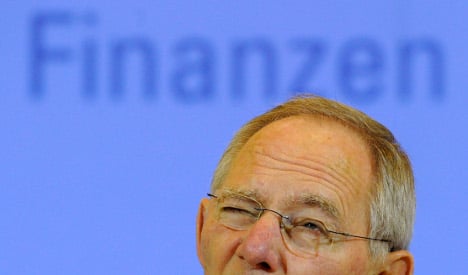 “Every three months, Greece’s government must give a comprehensive report to the European Commission and the IMF (International Monetary Fund) about how it is implementing its plan,” Schäuble told the Rheinische Post daily.

“If there are any violations, payments will be stopped. Then Athens will once again be threatened with bankruptcy,” he added.

Schäuble was speaking a day after Chancellor Angela Merkel’s cabinet approved its slice of a €110-billion ($145-billion) loan package for ailing Greece.

Berlin agreed to stump up some €22.4 billion over the three-year period, with €8.4 billion this year.

Surveys have shown that the bailout is deeply unpopular in the country and on Tuesday, Germany’s most widely-read paper, Bild, launched a scathing attack on the decision.

“Why are our politicians breaking the EU Treaty?” the paper screamed on its front page, printing a copy of article 125 of the Lisbon Treaty which forbids one member state from assuming the liabilities of another.

Inside, the paper urged its readers to send a letter to their members of parliament to demand they contribute personally to the Greek bailout with their annual salary. In return for the loans, Athens has pledged to cut public sector bonuses,

shake up the retirement system and hike sales tax.

Germany’s portion of the package must now be approved in a parliamentary vote on Friday.

But Schäuble said on Tuesday German banks are prepared to contribute to the rescue plan for Greece after meeting top bankers, without giving specific figures.

Reading a joint statement from bankers, he said: “We, as representatives of the German finance sector, are prepared, together with our European colleagues… to offer a tangible and positive contribution.”

“This shows we have a common responsibility,” the minister stressed.

Under the agreement, the banks would subscribe to bonds being issued by the KfW state development bank to provide Germany’s €22.4 billion ($29.4-billion) slice of the bailout package.