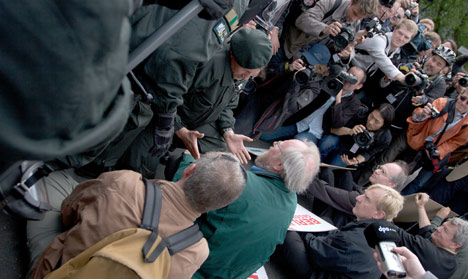 An officer asks Thierse (in green) to end the blockade. Photo: DPA

“One can’t play the statesman with an official car and driver during the week and then on the weekend sit on the street blocking police officers as a salon revolutionary,” Wendt said.

Thierse’s “public celebration of breaking the law” has damaged the reputation of the Bundestag, he continued.

Meanwhile the head of the Union of Police (GdP) Konrad Freiberg told daily Saarbrücker Zeitung that the incident was “shocking,” adding that Thierse had taken advantage of his “prominent status” during the demonstration.

“My post does not limit my civil liberties and duties,” he told news agency DDP. “I can’t call others to courage without acting courageously myself.”

The SPD politician also said he was astounded that individual demonstrators were in question when hundreds of neo-Nazis had been on the streets of Berlin.

“We did not demonstrate against the police. They are not our enemies,” Thierse added, explaining that he had willing moved upon police request, and that the situation had been friendly.