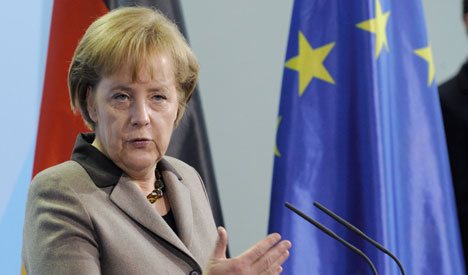 “All the experts say that Portugal, Spain and Ireland are in a much better situation than Greece,” Merkel said in an interview with the mass-circulation Bild am Sonntag newspaper.

“These countries can also see that the path taken by Greece with the IMF is not an easy one. As a result they will do all they can to avoid this themselves, and they have already set out saving efforts,” Merkel said.

Greek Prime Minister George Papandreou said Sunday that a bailout package of “unprecedented” size had been agreed with the European Union and the International Monetary Fund to avoid what he called “bankruptcy,” but that the country would have to make “big sacrifices” in return.

Mr. Papandreou said that unless Greeks were willing to make major sacrifices the country would go bankrupt.

“These sacrifices will give us breathing space and the time we need to make great changes,” he said.

The rescue deal could be worth as much as €120 billion ($160 billion) over three years.

The Greek debt crisis has raised fears that other countries in the 16-nation eurozone with shaky finances would also be unable to finance their debt mountains and would be forced to seek help from outside.