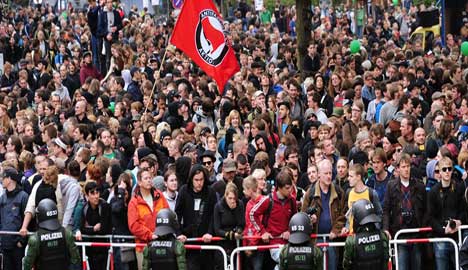 Fearing riots, police across Germany made efforts to separate leftist and neo-Nazi demonstrators in several cities across Germany.

In Berlin, neo-Nazis and people from the far-left spent hours vying for control of May Day demonstration routes through the German capital, although by early evening on Saturday, confrontations had mostly ended peacefully.

Violence, with brawls between leftists and rightists, burning barricades and damage to banks and shops, has been an annual ritual on May Day for more than two decades in Berlin, Hamburg and other German cities.

In Berlin, about 500 of the far-rightists marched through a northern district of the capital, although they were outnumbered by thousands of opponents.

Police had expected around 3,000 neo-Nazis to march, and some 7,000 police were deployed along with a water cannon.

Leftists claimed 10,000 people had turned up to confront the neo-Nazis.

Their 6-kilometre route had been approved by police under German

laws protecting the constitutional right of everyone to demonstrate.

The far-right march began two hours late after leftists blocked the road. Riot police roughly handled some of those obstructing the route, among them the deputy speaker of the German parliament, Wolfgang Thierse, a Social Democrat.

But at one point, police made the right-wing marchers turn around after it became clear they could not clear the streets along the entire route.

Another 300 far-rightists, including people from Spain, Italy and the Czech Republic, suddenly showed up in western part of the city, apparently intent on an unauthorized march down Kurfürstendamm boulevard. Police reported the rightists harassed people who looked foreign and threw bottles and stones at officers. Around 250 of them were arrested.

More than 13,000 people protested in Würzburg and Schweinfurt against right-wing extremism. Some 800 neo-Nazis gathered in Schweinfurt.

In Zwickau in Saxony, police reported several injuries after supporters of the far-right NPD party threw stones at leftists. Some 1,500 had gathered to protest the extreme right.