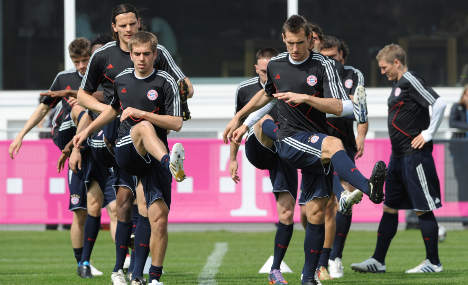 After the highs of reaching the Champions League final with a 3-0 win at Lyon on Tuesday, Bayern return to German league action against strugglers Bochum who sacked coach Heiko Herrlich on Thursday.

His side must beat Bayern to keep alive their hopes of staying in the Bundesliga with only two games remaining.

Bayern are level on 64 points at the top with Schalke, but have a superior goal difference of 13 and, at least mathematically, can win the title on Saturday providing they beat Bochum and Schalke lose at Werder Bremen.

Munich face Inter Milan in the Champions League final in Madrid on May 22, Werder Bremen in the German Cup final on May 15 and are in pole-position to claim their 22nd league title.

“Things are happening which many people didn’t think could happen to Bayern before the season started,” said chairman Karl-Heinz Rummenigge. “It could end up a historic season.”

Bayern have midfielder Franck Ribery suspended for the Champions League final, but Hamit Altintop, who played superbly against Lyon, is likely to keep his place in the starting line-up.

The hosts are virtually at full-strength while Bochum have failed to win any of their last ten league games, picking up just three points in the process.

With third-placed Werder needing a victory in their battle with Bayer Leverkusen in the race for a Champions League spot, second-placed Schalke also need a win to stay in the hunt for the title.

Schalke have not won the German league since 1958 and welcome back 19-year-old midfielder Joel Matip, who was missing from the team for last week’s win over Hertha Berlin, because he was sitting school exams.

Despite a broken rib suffered in training a fortnight ago, Germany goalkeeper Rene Adler looks set to play for Bayer Leverkusen against Hertha Berlin.

“It is looking good, Rene works not only with great intensity, but is also very focused,” said Bayer coach Jupp Heynckes, without saying whether or not Adler will start. “He wants to help the team and is the sort of player who brings success.”

Hertha Berlin are virtually certain to be relegated as they are five points from safety and face two tough tests in the coming weeks with Bayern their opponents on May 8.

Two from the pack of Freiburg, Hannover, Nuremberg and Bochum will join them in being relegated with Hanover hosting Mönchengladbach and Nuremberg at Hamburg.

Freiburg are at Cologne and have the best chance of surviving after winning their last two games against Nuremberg and Wolfsburg.