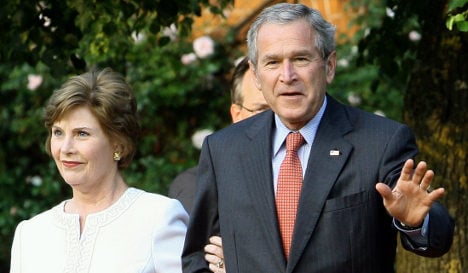 “We see absolutely no evidence to support (these allegations) at all,” said Christian Plöger, a spokesman for the Fundus Group that owns the Grand Hotel Heiligendamm, where the Bushes stayed for the summit. “The food was checked by security staff.”

“I suspect that this may be just to try and sell more copies of the book,” he told news agency AFP.

In her upcoming autobiography “Spoken from the Heart,” a copy of which was obtained by the New York Times, Laura Bush writes that she, her husband and staff members may have been poisoned when they fell ill during their stay.

The president was even bedridden for part of the trip, and while the Secret Service investigated the possibility they were poisoned, doctors could only conclude they all contracted a virus, the paper cites Laura Bush as writing.

After noting several high-profile poisonings, she wrote, “we never learned if any other delegations became ill, or if ours, mysteriously, was the only one.”

The book, due for release in May, also deals with a fatal November 1963 car accident when she was 17 in Texas and at the wheel of a car that hit another, killing the driver, a fellow student, the New York Times said.