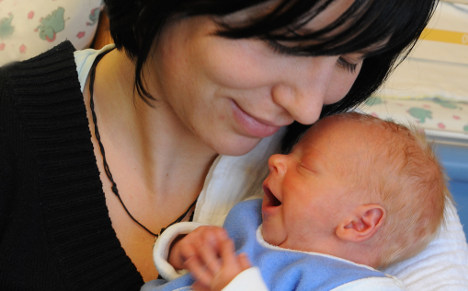 Oxytocin, a neurotransmitter that floods a woman’s system while she is giving birth and is also involved in triggering milk production for breast feeding, can also improve men’s ability to empathise with other people.

It also sensitises men to so-called “social indicators” such as approving or rebuking facial expressions – the faces that might appear, respectively, when flowers are purchased or the toilet seat is left up.

The scientists from the University of Bonn, along with colleagues from the Babraham Institute at Cambridge University in Britain, gave 24 male subjects an Oxytocin nasal spray and another 24 subjects a placebo.

They then showed the subjects a series of emotionally charged pictures, such as a weeping child, a girl hugging a cat, and a man grieving. The men then had to say to what extent they identified with the people in the pictures.

Although the placebo group was perfectly able to rationally interpret the expressions on the faces of the people pictured, the shot of Oxytocin gave the other men greater emotional empathy – in fact allowing them to reach the considerably higher levels of empathy usually seen in women.

Alternatively, the answers were followed by the display of colours – green for a right answer and red for a wrong one.

The amygdala, a part of the brain that deals with emotional situations – including fear – seems to play a key role, the researchers said.

Oxytocin is a hormone that plays an important role in triggering cervical dilation during childbirth and is instrumental in the formation of the emotional bond between a mother and a newborn child. It is also thought to be connected to such emotions as love and trust. Large amounts of it are also produced when a woman has an orgasm.

“Our study shows for the first time that emotional empathy is modulated by Oxytocin and that something similar also applies to the learning process for social indicators,” Hurlemann said.

The study was published in the most recent edition of the Journal of Neuroscience.