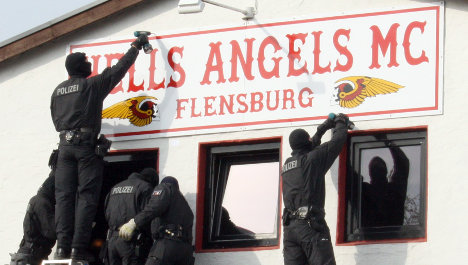 Interior Minister Klaus Schlie announced that the Flensburg chapter of the Hell’s Angels and the Neumünster chapter of the Bandidos were being banned on the grounds they were a threat to the constitutional order.

Some 300 police officers, including crack special forces commandos, raided 10 properties of gang members along with the club houses of the two chapters in Flensburg and Neumünster.

“The searches were for the purposes of investigation, seizure and recovery of the clubs’ property,” the Interior Ministry said in a statement.

The two clubs had “the essential aim of setting up criminal mastery over a specific region and to enforce the claim to power against the other club with violence using weapons,” Schlie said.

“This isn’t about harmless motorcycle clubs whose members meet peacefully on the weekends,” he said.

The image of respectable, motorcycling fathers who simply liked to ride in their spare time was a “public relations myth of these clubs,” Schlie said.

Two clubs erupted into open warfare last year after the Bandidos tried to get a foothold in Germany’s northern-most state, where nine Hells Angels clubs and crews are located.

In June, police responded to a shooting at a house in Neumünster. Four shots were fired into the living room window but no one was hurt.

The clubs were to be dismantled without delay, Schlie added.

“Any activity, or the formation of replacement organisations, is forbidden to them,” he said. “The clubs badges must no longer be used or displayed in public.”

However, he could not rule out further violence between the clubs’ members, despite the ban.

The Hells Angels were banned in Hamburg in 1986, but have continued to operate under different names, including ”Red-White,” the club’s colours, or ”Harbour City.”