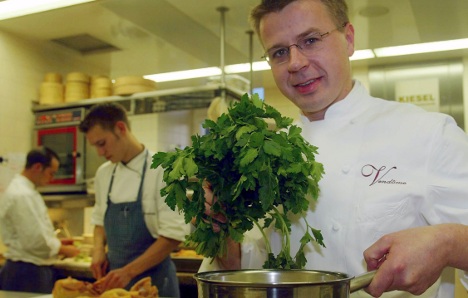 In the S. Pellegrino World’s 50 Best Restaurants list announced this week, Joachim Wissler’s Vendome restaurant near Cologne was Germany’s best performer, coming in at number 22, three places higher than last year, when it debuted on the list.

Vendome was lauded for its “hearty German fare such as pig’s ear and calf’s cheek alongside lobster and foie gras.”

Sven Elverfeld’s Aqua, in the Ritz Carlon in Wolfsburg near near Volkswagen’s Autostadt theme park, won 34th place, making the list for the first time.

The listing described Elverfeld’s cooking as an attempt to “evoke the memories of his German guest’s regional roots,” with “reworkings of regional dishes such as boiled fillet of Müritz lamb with Frankfurt green sauce and Breton sole in modern Finkenwerder style.

Tantris restaurant in Munich was knocked out of the top 50, having taken 44th place in 2009.

The results are a dim comparison with other major European countries. Spain has five restaurants in the top 50 – four of them in the top 10, including the famous El Bulli, which dropped from first to second place this year. France has six and Italy five.

Outside of Europe, the United States has eight restaurants in the top 50.

In an upset, Spain’s El Bulli was knocked out of first place by Danish restaurant Noma, which jumped seven places.