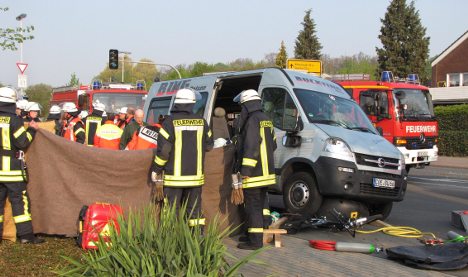 Eleven children and two adults were injured in the accident in the town of Coesfeld.

Police said that for reasons still not clear, the minibus veered off the right side of the street on Wednesday and drove into a group of children, aged 11 to 15, waiting with their bicycles at a set of traffic lights.

One 13-year-old boy was dragged 40 metres by the vehicle, suffering life-threatening injuries. The boy was flown by helicopter to hospital. A 14-year-old girl was also fighting for her life in hospital.

Another 11 people were injured – among them two other children seriously. The 37-year-old bus driver was also injured, as was another adult who had been escorting the group of children. The driver was suffering shock and was not fit to be interviewed, the police said.

The bus was on its way to a residence for the disabled, the police statement said. A blood alcohol reading had been taken from the driver, but he appeared not to have been drunk.

Investigations into the accident were continuing – with one possibility being that the driver had noticed a red light too late and had swerved to avoid a collision with backed-up traffic.