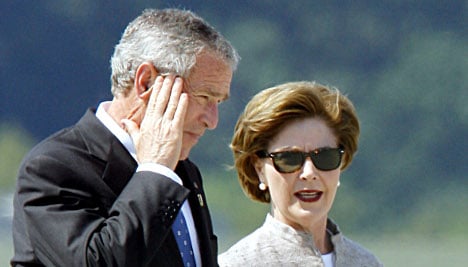 Former US President George Bush and Laura leaving the summit in 2007. Photo: DPA

In her memoir “Spoken From the Heart,” Bush said that she and her husband fell violently ill on the second day of the summit in the exclusive Baltic Sea resort.

“Exceedingly alarmed, the Secret Service went on full alert, combing the resort for potential poisons,” wrote Bush according to the news website Politico. “The overriding fear was that terrorists had gotten control of a dangerous substance and planted it at the resort.”

In addition to the president and his wife, other members of the US delegation became ill, including one staff member who suffered permanent hearing loss.

“We never learned if any other delegations became ill, or if ours, mysteriously, was the only one,” wrote Bush according to the New York Times.

But no-one could ever find conclusive evidence the Americans had been poisoned.

“The most concrete conclusion any doctors could reach was that we contracted a virus that attacks a nerve near the inner ear and is prevalent in Heiligendamm,” she wrote.

Mrs. Bush’s memoir will be published on May 4.