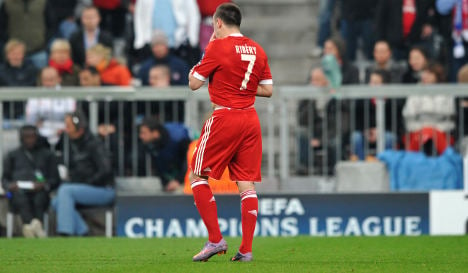 The Frenchman was shown a straight red card for treading on the foot of Lyon striker Lisandro Lopez in the first-leg semi-final last Wednesday, which Bayern won 1-0 in Munich. He missed Tuesday’s 3-0 second-leg win while serving part of the ban.

The decision means he will miss the final in Madrid on May 22, against either Barcelona or Inter Milan, and will also sit out Bayern’s first game of next season’s Champions League campaign.

Shortly after the announcement, Bayern said they would appeal the decision.

“Franck Ribery and Bayern Munich will not accept this decision and will explore all avenues available,” said spokesman Markus Hoerwick.

Munich booked their place in the Champions League final with a superb performance on Tuesday in Lyon as their Croatian striker Ivica Olic scored a hat-trick in the 3-0 rout of the French side.

“That is a hard decision, it is a pity for both Franck and the team that he will miss the final,” said Olic, who has seven goals from this season’s European campaign. “He is an important player for us.”

Bayern Munich now have three days in which to appeal the decision as they bid to win the Champions League title, formerly known as the European Cup, for the fifth time. They last won the title in 2001.

It has been a difficult few weeks for Ribery who was questioned by French police recently as part of their investigations into the under-age call-girl scandal which has rocked France’s national football team.

But Bayern’s win at Lyon on Tuesday means they will receive at least €25.4 million from European football’s govening body UEFA for reaching this season’s Champions League final.

That figure includes €5.2 million for reaching the final and at least €20 million for their share of the television rights as around 9.42 million Germans watched Tuesday’s game.

Bayern’s bosses have said each player will make a bonus of a month and a half’s salary is they beat either Barcelona or Inter Milan.

Bayern are also the current Bundesliga leaders and face Werder Bremen in the German Cup final on May 15 at Berlin’s Olympic Stadium.