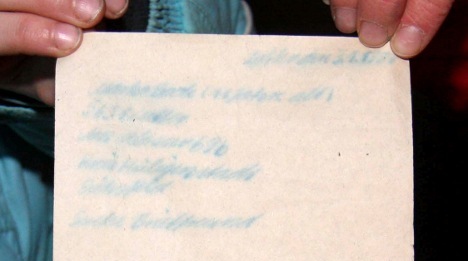 Nine-year-old Youri Marhauer was out for a walk with his mother Silke, sister Yule and her friend when he found the bottle trapped in a pile of flotsam in the canal leading to the Leine River in early March.

Inside the old sparkling wine bottle he found the damp and barely decipherable letter written by an 11-year-old East German boy called Marko Bode on January 3, 1987.

According to his letter, Marko was looking for a new pen pal. And while his letter may have taken more than 20 years to reach a friend, it only travelled 42 kilometres from Marko’s village Lutter in Thuringia to the western German state of Lower Saxony.

The find was a national media sensation, helping Marhauer locate the now grown Bode, an engineer who still lives in Lutter and has a young son of his own.

Bode said that he and Marhauer looked at the letter together before going to find the place where the boy had found the bottle in the Leine River.

The experience was like “time travel,” Bode said, describing how he immediately recognised the letter again.

The two have already planned to meet again.

“Then I will show him where I threw the bottle in back then,” Bode said.