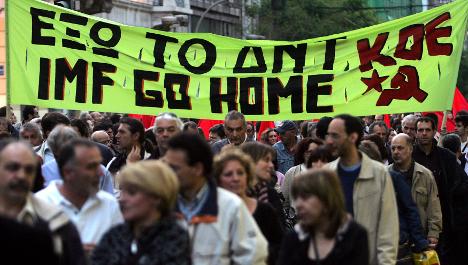 Protesters in Athens at the weekend. Photo: DPA

Speaking to reporters in a hastily arranged statement, Merkel said: “I say quite clearly. Germany will help, if the corresponding pre-conditions are met. That will take a few days.”

She said negotiators from the International Monetary Fund and the European Commission must thrash out with the Greek government a “sustainable, well worked-out” plan to get the country’s spiralling deficits under control.

Merkel said she had “faith” that these talks would produce a positive solution but emphasised that it would take a few more days before the full details of the programme were known.

With an eye on a key regional election on May 9, however, the chancellor said she could “understand the concerns” of the majority of Germans who are opposed to bailing out Greece.

The ball was now in the Greek court to contribute to a stable euro, she said.

“If Greece is ready to accept tough measures – and not just for one year, but for several years – then we have a good chance to keep and secure the euro as a stable currency for us all.”

On Friday, the Greek government formally asked for a €45-billion ($60-billion) EU-IMF loan plan to be activated to help the country out of its crippling debt and deficit crises.

Greece’s cost of borrowing rose above nine percent for the first time on Monday whereas the EU money would be available for around five percent. More than eight billion euros of Greek debt was set to mature by May 19. As Europe’s top economy, Germany would be expected to shell out the lion’s share of the cash for any emergency funds, with its portion estimated at €8.4 billion.

But Merkel firmly dismissed the notion, expressed by some politicians in Germany, that Greece should be expelled from the euro area. Asked if this was conceivable, she replied: “No. I say very clearly no.”

“What we need is a quick reaction for the stability of the eurozone as a whole and everything that takes us away from this central goal is at the moment not an option … we do not need uncertainty, but certainty,” she said.

Aware of the reluctance of taxpayers to foot the bill for a bailout of a country that seems to them as fiscally profligate, other senior German officials have talked tough on the possibility of providing aid.

Germany’s perceived hesitance has raised concerns among other eurozone partners, with Italy’s Foreign Minister Franco Frattini saying he was “concerned by the intransigence” demonstrated by Berlin.

“When you cast a domestic eye over European issues instead of a European eye over domestic questions, that worries me,” said Juncker, who also acts as finance chief for the 16 eurozone countries.

Others were even more strident in their tone.