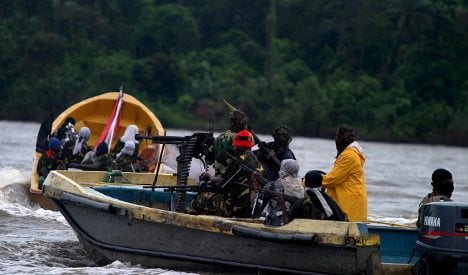 File picture of rebels from the MEND group in the Niger Delta. Photo: DPA

The men, aged 45 and 55, were abducted in Abia state in the oil-rich southern Niger Delta on Sunday, after going swimming in the Imo River.

They have been freed and are safe and sound, the minister said in a statement.

“They are well considering the circumstances,” he said.

A Nigerian security source said earlier this week that one of the men worked in Port Harcourt, the oil city capital of neighbouring Rivers State, while the other came from Nigeria’s commercial capital of Lagos.

According to police, the two foreigners had come to the river to swim in company of three young Nigerian women and a driver. The kidnappers seized the Germans after they got out of the water, while the women and the driver escaped.

Nigerian officials could not immediately confirm they had been released but Westerwelle said the men were in a secure location in Port Harcourt.

He thanked German and Nigerian authorities for their “tireless intervention” which he said had resulted in a swift end to the ordeal of the abducted men.

No group has claimed responsibility for the kidnapping and there has been no mention of whether the abductors received a ransom.

Hundreds of foreigners and locals, mostly oil workers, have been kidnapped since 2006 in Nigeria, most of them in the Niger Delta, where international oil companies operate, but where local people see little if any of the benefit.

A group calling itself the Movement for the Emancipation of the Niger Delta (MEND) has declared war on the oil industry in the region, and is thought to be behind some of the kidnappings.

Many of the people seized have been released unharmed, but in some cases only after payment of a ransom.