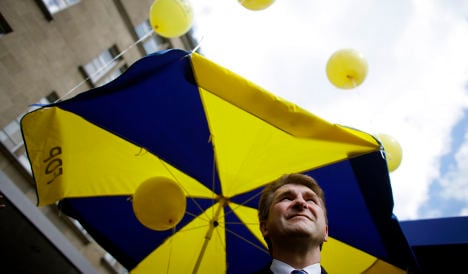 The conservative Christian Democrats (CDU) are garnered 38 percent of the participants’ support, while the centre-left Social Democrats (SPD) were at 34 percent, the environmentalist Greens were at 11 percent and the pro-business Free Democrats (FDP) had eight percent.

The survey, conducted by pollster Emnid for Focus magazine, suggested that the current national ruling coalition of CDU and FDP would not retain its majority after the May 9 state election.

Should a different state government take over in North Rhine-Westphalia, Angela Merkel’s federal CDU/CSU/FDP coalition would no longer have a majority in the upper house of Parliament, the Bundesrat, which would make passing laws more difficult for her government.

The pressure on North Rhine-Westphalia party leaders made itself evident on Saturday with an attack from head of the state FDP and vice state premier Andreas Pinkwart on the CDU.

He told the Rheinische Post the CDU was not being clear about its coalition intentions after the election.

“They are retaining the option of other constellations, with the Greens or the SPD,” he said.

This showed “the CDU has moved to the left,” he added, saying only the FDP’s presence in the government had ensured the coalition had kept to its political course.

This had to be maintained, he said, calling for voters to support the FDP so it could continue governing with the CDU.

The CDU state premier Jürgen Rüttgers has a high profile nationally, and scored better than his SPD challenger Annelore Kraft in the opinion poll. When asked who they would pick, if they were able to elect the premier directly, 42 percent said they would choose Rüttgers, while 39 percent said they supported Kraft.