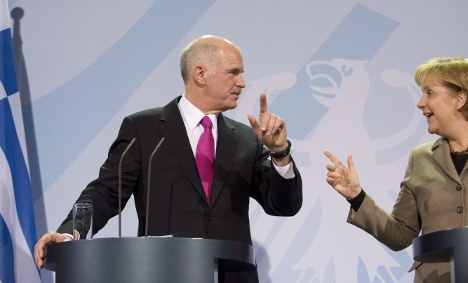 Speaking after Greece applied for up to €45 billion in emergency funds from the EU and the International Monetary Fund, Merkel said: “The stability of our currency is the first priority.”

“The savings plans absolutely have to be credible,” she added.

Officials need “to determine whether this is just a Greek problem or whether this is a problem for the stability of the single currency. Then we want, of course, to negotiate quickly and in determined fashion,” she said.

Until such deliberations had taken place, it was not possible to talk about how much would be in any potential aid plan for Athens. “Greece must play its part in ensuring that its finances return to a solid path,” Merkel said.

Eurozone ministers have prepared the outlines of a package of €30 billion in 36-month loans for this year at a rate of around 5 percent if needed.

The IMF could contribute another €10 billion or €15 billion.

As Europe’s top economy, Germany would have to dig deeper than any other country, with Michael Offer, a spokesman for the finance minister, saying Berlin would have to stump up some €8.4 billion if the package goes ahead.

The issue is not without political ramifications in Germany as well, with a key regional election looming on May 9. Opinion surveys have shown that bailing out Greece is unpopular with the voters.

Any loans would also have to be agreed by both houses of parliament while at the same time, there are concerns that Germany might have to pay even more.

Frank Schäffler, the fiscal expert of the pro-business FDP party, the junior partner in Merkel’s governing coalition, said Germany might have to stump up as much as 30 billion euros by 2012.

“Greece is a bottomless pit,” the outspoken Schäffler, who previously suggested Greece should sell some of its islands to raise cash, told mass circulation daily Bild on Friday.

There are also concerns that a legal challenge to the aid could be mounted in the German constitutional court.

Perhaps with these worries in mind, Germany has appeared more reluctant than other countries to rush to Greece’s aid in the immediate wake of Athens’ appeal.

“Such an intervention would only be possible if there were an extreme need,” said Merkel. “We have known for some time that Greek public finances are in a difficult situation.”

With Germany’s own public finances under pressure, Merkel was at pains to point out that any funds to Greece would come not from state coffers, but from the country’s development bank KfW, backed by government guarantees.