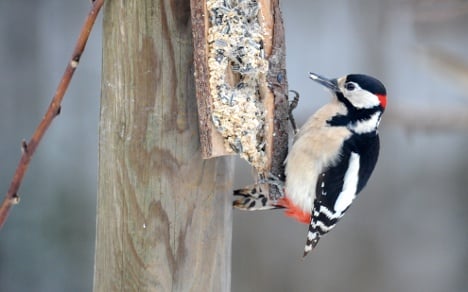 The problem has become so common in Germany’s capital that tradesman Holm Draber has set up the country’s first hotline fur woodpecker damage, as the normally shy forest birds invade the city and leave behind holes in the insulated wall material from which many houses are built.

Draber, 42, a painter by trade, said he had been hearing a growing chorus of complaints from landlords about damage wrought by the protected birds.

“I’m getting three or four jobs a week now to patch up holes,” said Draber, whose Berlin firm Colour Clean Berlin has begun specialising in fixing this damage.

Experts say the Great Spotted Woodpecker is drawn to the Styropor-covered walls because of the acoustic quality of the building material.

“The insulation feels like soft wood to the birds,” said Johannes Schwarz from the Berlin Nature Conservation Authority.

Between 2,200 and 3,200 mating pairs live in the forests, larger parks and cemeteries of Berlin.

“It is a growing trend,” Schwarz said of the tendency for the birds to peck holes in walls.

In comparison to other major German cities, such as Hamburg or Munich, Berlin’s great spotted woodpeckers are much more likely to leave their mark on the facades and walls of people’s homes.

“To some extent, the birds prefer the capital, although they don’t in most cases use the holes themselves,” said Schwarz. “Observations show that for example starlings or sparrows live in the holes.”

The pecking of walls has long been observed not only around the edges of the city but even in the centre of town.

“Even in the inner city, the birds go wild for the walls – there only has to be plenty of greenery in the area. Two or three mating pairs live in each of the bigger parks.”

Even on the busy shopping strip of Kurfürstendamm, “wallpeckers” have been tapping away.

According to the Nature Protection Federation of Gemany (NABU), the population of the birds is not actually growing. All up, there is a stable population of between 550,000 and 740,000 mating pairs across the country, NABU bird expert Markus Nipkow said.

With spring having arrived, the birds are highly active – which means tradesman Draber’s phone has been ringing regularly and he’s been learning a lot about the woodpecker’s habits.

In 2009, his firm fixed more than 300 holes of diameters ranging from two to 10 centimetres, and he expects this number to rise even higher this year.

Not all customers end up satisfied, though.

“There are cases when the ‘woodpecker walls’ can’t be closed up because some animal renters have already moved in,” said Draber.