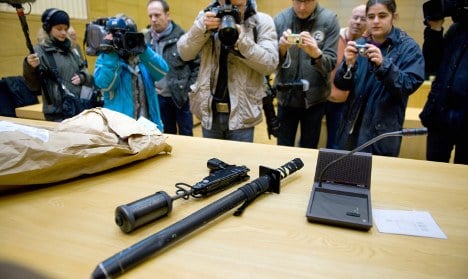 The man, who the court said blamed the church for his estrangement from his daughter – herself a Jehovah’s Witness – entered the church hall in the state of North Rhine-Westphalia last July armed with a machine gun, knife and samurai sword.

But he was unable to fire the weapon and was eventually overpowered by worshippers before he could inflict any damage.

The court in Halle judged the man guilty of 39 counts of attempted murder – the number of bullets he was carrying – as well as weapons charges.

The man had denied any intent to murder and his lawyer said they would appeal the verdict.

Judge Jutta Albert said in her hour-long judgement that on the evening of July 30 2009, “nightmare became reality” for the 81 worshippers gathered at the Jehovah’s Witnesses church hall in Bielefeld.

The man had stormed the prayer meeting with intention of killing as many people as possible, she said.

The former prison warden, bricklayer and soldier carried three magazines with a total of 39 rounds, as well as a knife and a samurai sword.

Rejecting the claim he had not intended to kill anyone, Judge Albert said the man had been driven by an “animal hatred” because his daughter had turned away from him and joined the religious group.

She added that the pensioner had long planned the crime, keeping contact with the church in order to spy on it. This was proven by a letter he had written to his son expressing his hatred for the church and outlining his plans.

The man had “preyed on the ignorance of the congregation” and planned to “wreak a bloodbath in the church hall,” she said.

The only reason he failed to carry out his murderous plan was that he could not operate the machine gun. Likely he had been too delirious with rage to handle the weapon or had been unable to release the safety catch and pull the trigger because he was wearing thick gloves.

But crucially, the weapons were fully functional, Judge Albert said.

Reading from a criminal profile, she said the man had been above the average fitness and mentally capability for his age. However she also stressed he had a tendency to violence, having once beaten his adult daughter in a cellar while wearing leather gloves.

Lawyer Werner Robbers said after the trial his client still denied he had intended to murder anyone and would appeal the verdict and sentence. The man claimed during the trial he wanted to warn the Jehovah’s Witnesses congregation of the dangers of Islamic extremism.

He also claimed he had stumbled on the weapons by accident in the woods. If he’d wanted a bloodbath he would have succeeded, he said, given his familiarity with weapons.