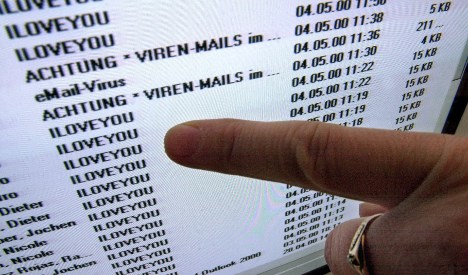 Some 12 percent of malicious software circulating in Europe, the Middle East and Africa in 2009 was deliberately spread via computers in Germany, the study by anti-virus software firm Symantec found. That compared with 9 percent from Britain and 8 percent from Russia.

The figures come from the annual Symantec Internet Security Threat Report, which includes regional figures that group together Europe, the Middle East and Africa (EMEA).

The good news is that Germany’s share of the blame for nasty computer bugs in the EMEA region dropped from 14 percent in 2008. Worldwide, Germany was the 4th worst country for malicious software, creating 5 percent of the world’s total, down from 3rd place and 6 percent in 2008.

It ranked behind the United States at 19 percent, China at 8 percent and Brazil at 6 percent.

Germany was also the EMEA region’s clear leader in “internet bot” software – applications that run automated tasks over the internet. These include “spambots,” which are used to send out massive amounts of spam or junk email. Some 14 percent of bot-infected computers were in Germany.

Germany led the region in creating bot software too, with 24 percent of the region’s bot control servers – the points from which bots are controlled.

The report did however point out that there are not necessarily more malicious computer scoundrels in the country. Rather, they drew a connection between criminal computer activity and the coverage of broadband internet infrastructure. Germany has a wide broadband coverage with the highest number of broadband users in Europe, the report said.