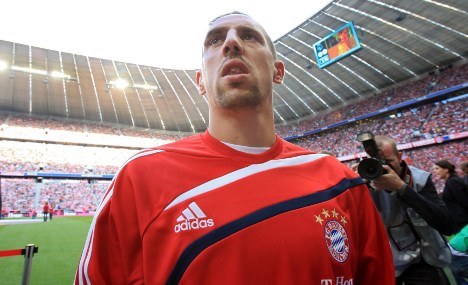 A file photo of Ribery in Munich. Photo: DPA

The case falls less than two months before Ribery, the Bayern Munich midfielder and one of the stars of his national team, is due to play for France in the football World Cup in South Africa.

The prosecution service official, who declined to be named according to regular French practice, told AFP that Ribery had admitted having relations with the prostitute but says he did not know she was underage.

“It is up to the judge Andre Dando to decide whether or not to bring charges against him,” the source said.

Soliciting sex with an underage minor in France carries a three-year jail term and a fine of €45,000.

On Sunday, Ribery’s lawyer Sophie Bottai told AFP the player was quizzed as a witness by French police investigating prostitution in a case centred on a Paris night club frequented by certain French internationals.

The judicial official said on Monday that investigators had found evidence of prostitution involving minors at the club.

Bottai said 27-year-old Ribery was summoned by police to explain his relationship with an acquaintance who had connections with a call girl ring and stressed that no charges had been brought against him.

L’Equipe newspaper reported Sunday that a third French international player could be questioned in the coming weeks as part of the same investigation.

“There is no reaction to give on a matter like this,” the president of the French Football Federation Jean-Pierre Escalettes told AFP on Sunday.

“An investigation is underway and I have no information on that. At the moment it is not possible to make a comment,” he added.

Ribery is a key player in the French international side, taking over in the midfield from Zinedine Zidane who was a mainstay in the French team that won the World Cup in 1998 and reached the final four years ago.

He made his breakthrough into football’s big-time with Marseille in France before transferring to Bayern Munich. He has been linked with a high-profile transfer to Spain or possibly England in the close season this summer.