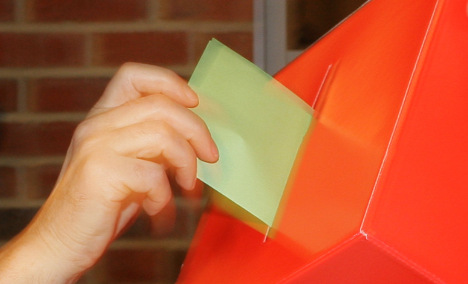 The roughly 100,000 Britons, as well as 60,000 British troops and their dependants who live in Germany and have been registered to vote in the UK in the last 15 years are eligible to vote from abroad for the May 6 election, British Embassy spokesperson Julius Schellmann told The Local.

Those who may have been too young to register before they moved abroad can still do so if a parent or guardian has been registered in the last 15 years.

Not much time is left before the April 20 deadline, but anyone who needs assistance with their registration can contact the British Embassy directly, Schellmann told The Local. The main registration method is online, though the embassy also offers telephone and mail services.

“All of the necessary information can be found on our website,” he said.

According to the UK’s independent elections watchdog, the Electoral Commission, fewer than 14,000 of the 5.5 million Britons living abroad are registered to vote, a fact which spurred a large outreach campaign from the organisation to encourage expats to exercise their right to vote.

The embassy has also ramped up its efforts to inform expats of their democratic rights, Schellmann said, adding that the consular section had reported a “remarkable increase” in inquiries about voter registration in recent weeks.

“We will try to answer each inquiry as quickly as possible, though this is a bit difficult right now with the volcano situation happening simultaneously,” he said.

But those registering to vote from abroad for the first time should look out for one point that has been the source of some confusion, Schellmann warned.

Registration forms must be witnessed by another UK citizen – and this cannot be an embassy or consulate staff member.