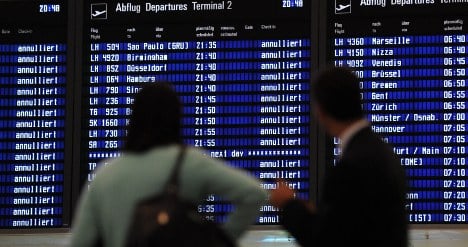 “We are still examining whether to extend or temporarily relax these measures … short-term changes are still possible depending on the weather situation,” the agency said in a statement on its website.

Reports from the Volcanic Ash Advisory Centre (VAAC) in London earlier on Monday said weather conditions were not favourable for moving the ash from Iceland’s Eyjafjallajokull volcano out of the region.

The cancellation of thousands of flights across Europe has left travellers stranded in airports across the region and airlines, which are bleeding hundreds of millions of euros, questioning whether safety calculations are sensible or accurate.

Many German travellers have been unable to get home. However, Lufthansa announced Monday it had been given special permission to land about 50 planes in Germany that had been stuck overseas, meaning about 15,000 passengers could get home. The flights would come from Asia, Africa, North America and South America, and they would land Tuesday at Frankfurt, Munich and Düsseldorf.

Aviation authorities also gave carrier Air Berlin approval to land a flight from the Spanish holiday island of Majorca. The flight had about 170 passengers was expected to touch down in Munich about 3.45 pm.

European flight safety agency Eurocontrol said in a statement it expected that between 8,000 and 9,000 flights would go ahead Monday in Europe’s airspace, compared with 28,000 on a normal Monday.

According to Eurocontrol, countries that have closed their airports include Belgium, parts of Croatia, the Czech Republic, Denmark, Estonia, Finland, parts of France, most of Germany, Hungary, Ireland, northern Italy, the Netherlands, parts of Norway, Poland, Romania, Serbia, Slovenia, Slovakia, Sweden, Switzerland, Ukraine and the UK.

Over the weekend Chancellor Angela Merkel and many other European leaders were forced to cancel their plans to attend the state burial of late Polish President Lech Kaczynski, who died in a plane crash along with dozens of others in Russia a week ago.