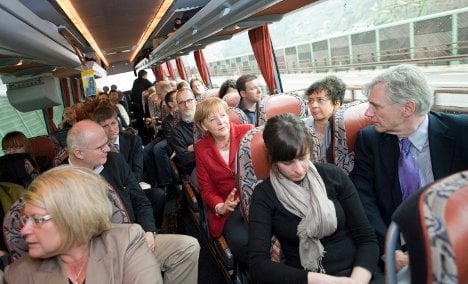 Merkel finally arrived home Sunday afternoon – after a three-day odyssey by plane, bus and car through Portugal, Italy and Austria. She was exactly 48 hours late from her trip to the United States, thanks to the cloud of Icelandic volcano ash that continues to hover over Europe.

The woman Forbes magazine has named the world’s most powerful four years running finished her US trip, which took in Barack Obama’s nuclear security summit and a visit to California, on Thursday evening. But due to the volcanic ash that shut down much of Europe’s air space by Friday, her flight home was diverted to Lisbon, Portugal.

On Saturday, they managed to fly to Rome. Joining them was top Finance Ministry official Jörg Asmussen, who was coming from the European Union finance ministers’ meeting in Madrid and grabbed the chance to tag along with the governmental convoy to get a bit closer to home.

After the nearly three hour flight, Merkel landed in Rome, where she and her delegation piled into cars and buses – the journalists in buses and Merkel in an armoured limousine. From here they drove 1,000 kilometres to the town of Bolzano in the South Tyrol region of Italy.

“It’s all fine,” she told reporters on the road. “We’ll be back in Berlin for the beginning of the working week.”

But the road trip did not turn out to be incident-free. The journalists’ bus had a tyre blowout near Florence. Merkel waited a while with the rest of the convoy before driving on for security reasons and arriving at her hotel in Bozen in the late afternoon, with the journalists following three hours later.

At some point it became clear that Merkel wasn’t going to make the funeral of Polish President Lech Kaczynski and his wife Maria on Sunday in Krakow and she sent word of the cancellation.

On Sunday morning, Merkel’s crew piled back into cars and buses for the last leg – a journey of “only” 850 kilometres.

“We’ve been very comfortable and now we’re all very happy to be homeward bound for Berlin,” she said, climbing into the journalists’ bus to ride with the press pack for a while. Finally, the Chancellor arrived home in Berlin at 3 pm Sunday – exactly 48 hours later than originally planned.

Defence Minister Karl-Theodor zu Guttenberg had a similarly tough time on his way back from visiting German troops in Afghanistan. His flight on Friday was diverted to Istanbul, where he spent the night before hitting the road for Berlin – an ambitious distance of 2,200 kilometres.

By car and bus – organised by Germany’s embassy – Guttenberg and his entourage wound their way through Bulgaria and Romania to Hungary, making just one short overnight stop. From Budapest, he managed to take a propeller plane to Berlin, arriving about the same time as Merkel back in the capital.