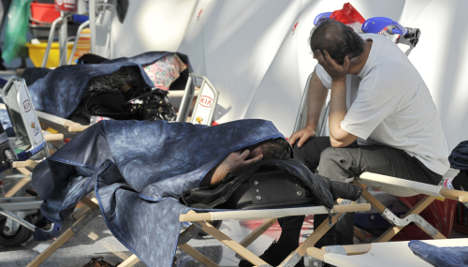 Facing what is likely to be a third night on camp beds in the airport, the passengers have not even been able to get their luggage, leading to airport staff buying T-shirts and underwear for them from nearby shops.

Fraport, the company which operates the airport, has set up film screenings for the stranded passengers, and even offered them tours to keep them from getting too bored.

“This kind of thing has never happened,” said a Fraport spokesman. He said the passengers were not enthusiastic about their situation, but that the atmosphere was still friendly.

The stranded people have been allowed outside a little, to take a walk in the fresh air, but are not permitted by visa restrictions to actually leave.

Of the 1,500 people who were initially stuck in transit, around half have been issued with emergency visas so that they can be put up in nearby hotels, or continue their journey by road to England or France. But those from Africa, Asia and Russia have been denied such visas and are stuck in the airport.

“We are making the best of it,” said the Fraport spokesman. He said his colleagues were trying to make the passengers’ captive time as pleasant as possible, and were allowing them into a sports hall to shower, while children were being entertained with toys and cartoons.

Adults were being offered internet access, while a crisis intervention team was also on offer for those who were having difficulty coping. The Fraport spokesman said no-one had lost their nerve yet, despite the understandable frustration.