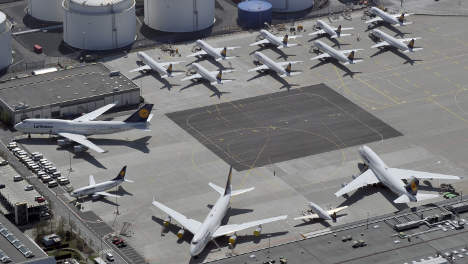 The Bild am Sonntag newspaper reported that both Lufthansa and Air Berlin, which are haemorrhaging money with all their European planes grounded, have questioned the flight ban, saying their experience shows the ash poses no danger.

“We sent ten Boeing 747 and Airbus 340 jets on transfer flights from Munich to Frankfurt,” Lufthansa spokesman Klaus Walther told the paper. The planes were moved in order to be in the most useful place once the ban is lifted, he explained.

“Our machines flew to a height of 24,000 feet, or around 8,000 metres. In Frankfurt the machines were examined by our technicians. They didn’t find the slightest scratch on the cockpit windscreens, on the outer skin nor in the engines.”

“The flight ban, which is completely based on computer calculations, is causing economic damage in the billions. This is why, for the future, we demand that dependable measurements must be available before a flight ban is imposed.”

“The closure of the airspace has been imposed solely on the basis of data from a computer simulation from the Volcanic Ash Advisory Centre in London,” Joachim Hunold, head of Air Berlin, told the paper.

“Not even a weather balloon has been sent up in Germany to measure how much volcanic ash is actually in the air,” Hunold said.

On Sunday he criticised the government for not having set up a crisis team. He said he had sent two Airbus planes to the current maximum allowed height of 3,000 metres, and that they had shown absolutely no damage on their return.

“We are amazed that the results from the test flights conducted by Lufthansa and Air Berlin on Saturday have had absolutely no effect on the decisions made by the air safety authorities,” he said.

He offered to conduct further test flights to gather further evidence on whether the fears that the ash particles would damage planes.

The Bild am Sonntag said a plane belonging to the German air and space travel centre, DLR, had not been ready for use as the necessary instruments to measure volcanic ash still had to be installed.

A spokesman for the DLR said on Sunday that a flight would go up to 10,000 metres on Monday taking equipment to measure the density of the ash distribution at that height.

Dutch airline KLM has also reported that it sent a jet to 13,000 metres and found nothing unusual, according to Der Spiegel magazine.

A spokesman for the company said the flight from Düsseldorf to Amsterdam had been a test flight on request from the European Union. Further test flights have been taking place in France and Belgium, the magazine said.

The flight ban has been extended to 8 pm on Sunday, with no end in sight. The DFS said on Sunday it was unclear how long planes would have to remain grounded.

Meteorologists say they expect the northwest winds which are bringing the cloud of ash from Iceland to mainland Europe to continue during next week.

The German airports association, ADV, has asked for the authorities to relax limits on early and late flying times once the ban is lifted, so that passengers waiting to get to their destinations can be moved as soon as possible.

Ralph Beisel, manager of the association said on Saturday that airports were prepared to bring in additional personnel to deal with the expected flood of traffic.