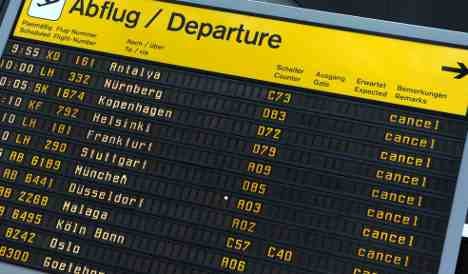 The aircraft, diverted on Friday to Munich international airport which had remained opened until 8 pm, “would be analysed and did not show any visible damage” from the ash, he said.

A spokeswoman for the German DFS air traffic authority said the weather conditions had led to ash from the Eyjafjallajokull volcano spreading relatively evenly and completely over Germany.

The weather, which promises a warm and sunny time on the ground, is almost perfectly wrong for clearing the huge plume of ash spread over Europe, said Helmut Malewski from the German weather service.

He said the high pressure system which currently stretches from the Azores to central Europe means the ash will not be blown away by winds, nor washed to the ground by rain.

And although the start of the week will bring low pressure systems to bear over Germany, the northwest winds which are currently bringing the ash from Iceland to central Europe, are expected to continue next week.

The Reykjavik meteorological institute said on Saturday morning that there had been no change in the volcano’s activities during the night, with further ash and smoke being added to the already enormous plume.

Around 60 percent of planes, or 16,000 flights, to and from airports across Europe were cancelled on Friday alone, while the European Organisation for the Safety of Air Navigation (Eurocontrol) said the chaos was the worst since the terror attacks of September 11, 2001.

Even Switzerland was affected on Friday night, with all airports there closing at around midnight.

Holidaymakers hoping to travel with Neckermann, Thomas Cook, Bucher Last Minute and Air Marin have no hope of travelling on Saturday, but have been told they can change their arrangements at no cost. Condor has also cancelled all its flights for Saturday.

Other methods of travel are packed out too, with the Eurostar Channel tunnel rail service reporting thousands of passengers trying to get places on its London to Paris trains.

The International Air Transport Association warned that the chaos was costing airlines a combined burden of more than €230 million a day, while Scandinavian airline SAS said it would have to temporarily lay off up to 2,500 staff in Norway on Monday if planes remained on the ground.

Countries which have shut all or most of their airspace include Austria, Belgium, Britain, Czech Republic, Denmark, Estonia, Finland, France, Germany, Hungary, Latvia, the Netherlands, Poland, Romania, Slovakia, Spain, Sweden and Switzerland.

Ireland, Lithuania and Norway have been gradually reopening theirs, while airspace over Scotland and Northern Ireland is reportedly also being reopened.

Northern Italian airspace will be closed for at least eight hours on Saturday while the ash cloud arrives.