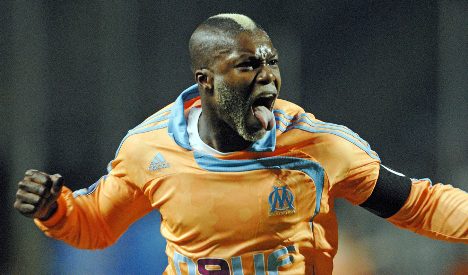 Certainly not a cissy - this is French player Djibril Aruun Cissé. Photo: DPA

Bayern shocked Manchester United to reach the Champions League’s semi-finals a fortnight ago and now takes on Lyon at Munich’s Allianz Arena on Wednesday in the first leg of Europe’s most lucrative domestic competition.

They host Hanover in the Bundesliga on Saturday evening, but van Gaal, who is in his first season in charge, says his side has a few weak links.

“I hope our desire is stronger than the fatigue, but the body is not as strong as the spirit,” said van Gaal.

“And we have a few cissies here,” he added, without naming players.

Bayern leads the Bundesliga with four games to go, and is through to the German Cup final against Werder Bremen on May 15, while bidding for a place in the Champions League final on May 22.

“We’ve had three outstanding weeks, but we’d better stay on our guard, because we’ve won nothing yet.”

Van Gaal gave his side a rare two-day break at the start of last week, but says his side faces several weeks of pressure if it is to win all three trophies.

“Expectations are running too high,” warned the coach.

Both 21-year-old defender Holger Badstuber and Thomas Müller, 20, have both impressed during their first season in the Bayern first-team, but are showing signs of fatigue having played their way into contention for World Cup places.

Badstuber is expected to be rested for Saturday’s Bundesliga game against Hanover with Diego Contento, 20, set to deputise.