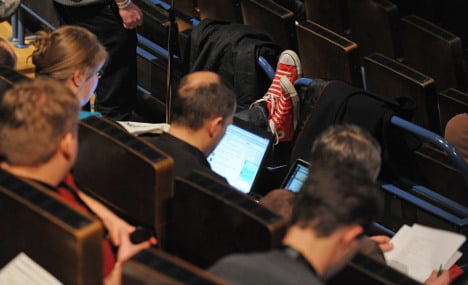 When blogger Sebastian Waters sits down to see US author and web guru Jeff Jarvis speak, he gets there early so he can “check in” the venue on Foursquare, an online location-based social service.

Then the 24-year-old updates his Facebook status and sends out a “tweet” using microblogging site Twitter. During the workshop, he uploads a quotation to his blog hosted by Tumblr, a multi-media blogging community.

“Its an easy way to connect with my friends and colleagues,” he said. “Maybe in five or 10 years, the rest of Germany will catch up to me!”

Waters may have a bigger online footprint than many Germans, but if re:publica’s growing numbers are any indication, his lifestyle is a glimpse into the country’s digital future. Already ubiquitous in North America, social networks are rapidly gaining audiences in Germany, which has made US sites such as Facebook, Tumblr and LinkedIn take notice and set up local operations.

Reflecting this growth, the fourth annual Berlin conference has seen participation increase exponentially since it began in 2007, when around 700 digital culture lovers participated. This year, more than 2,500 came for three days filled with 250 international speakers on the topic of online social culture.

“The youth are growing up with it and using it spontaneously and constantly,” Markus Schaffren, a social network researcher for ECO, the Association of the German Internet Industry, told The Local.

Social networking sites have even surpassed traditional websites in page impressions, he said.

In February 2010, Facebook opened its first German office in Hamburg. In the previous year, the company had seen active German users jump from 2.5 million to 7.5 million. Today, they are at 8 million and steadily rising.

LinkedIn, the networking site for professionals, launched its German site in February 2009 and has since attracted a million German-language users, a spokesperson told The Local.

“Our traffic and registration has doubled in Germany since we launched the localised version of Tumblr,” Meaghan O’Connell, the company’s outreach director said.

“We chose to dive in there first not only because there was a lot of growth, but because we had a strong community that we knew would give us meaningful experience,” O’Connell said, adding that the Tumblr community in Germany has been very loyal to the site.

“Coming to events like this helps me explain communications strategies to my clients,” the 36-year-old told The Local between talks.

Heyne noted the 2007 conference was much smaller and more German-specific, but added that the international repertoire of speakers this year made the conference more relevant to a growing global social network community.

But one thing that may be keeping German users offline is privacy fears.

“Most of the growing social networks are based in the US, meaning they are subject to those privacy laws, not necessarily the privacy laws of where their users are based,” said ECO’s Schaffren.

The Federation of German Consumer Organizations (VZBZ) then attacked Facebook’s privacy issues, urging Germans who use the site to shut down their accounts.

“This is not only a German topic,” a Facebook spokesperson told The Local. “All the laws that we have governing online security are 10 or 15-years-old. Changing them up for today’s online environment will be an ongoing process.”

“They need to be educated about how to best use social networking,” he said. “The whole European market is behind North America when it comes to online presence.”

For Peter Glaser, who spoke on “Digital Fascination” at re:publica, social networking is inevitable for Germany.