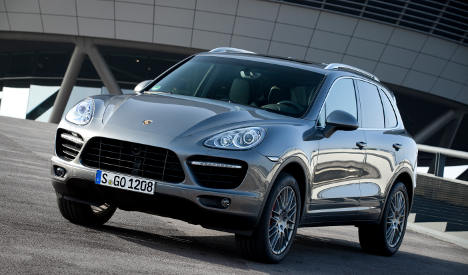 When Porsche first introduced the Cayenne eight years ago the sports car specialists proved they could make an SUV. Now they want to prove it’s a Porsche.

Not content to make a vehicle appealing to North America’s legions of pampered soccer moms, the Stuttgart-based carmaker has revamped the Cayenne for 2010.

The new model is leaner, meaner and even comes as a hybrid if you feel like helping out the environment while cruising on the autobahn, off-roading, or even just picking up some groceries.

Of course, the Swabians would never concede the old Cayenne wasn’t a real Porsche. But it’s apparent that they’ve made a distinct effort to ensure the new one has even more “Porsche DNA,” as lead designer Mitja Borkert put it during a press preview in Leipzig this week.

The effort has paid off, with the front-end of the new Cayenne looking distinctly more aggressive and shark-like than its predecessor.

“We’ve tried to pull the nose down as low as possible,” said Borkert, adding that all Porsche’s try to evoke the lines of a classic 911 Carrera.

CLICK HERE FOR A GALLERY OF THE NEW CAYENNE

In a flashy presentation at the company’s futuristic facility outside the eastern German city, he walked through all the nips and tucks his design team made to the old Cayenne just as a plastic surgeon might. A new nose, a lift here, some streamlining there – and the overall effect is dramatic.

The new model is five centimetres longer, yet its silhouette appears racier and considerably more compact.

“That’s exactly the effect we were going for,” said Porsche CEO Michael Macht.

He also lavished praise on the Cayenne team for combining the sporty exterior with entirely new engineering on the inside. The key innovation is a hybrid model, combining a powerful combustion engine with electrical drive.

There was lots of talk in Leipzig about “the Obama laws” – referring to the legislation being considered by the US government to drastically tighten a carmaker’s permissible emissions across its entire fleet of models. This would hit Porsche particularly hard, since unlike Volkswagen or Daimler it only makes powerful, petrol-hungry sports cars. Therefore hybrid Cayenne is undoubtedly a key part the company’s strategy to avoid punitive fines in the key North American market.

“Porsche will jump over this hurdle,” said Macht. “We will adhere to the new laws by 2015.”

Of course, the Cayenne was already a hybrid of sorts – half sports car and half SUV. And Porsche makes no secret it aims to dominate the luxury crossover segment with its latest offerings.

The Local tested three models in Leipzig: the new hybrid, the Cayenne S, and a turbo-charged monster.

All have quality interiors to be expected from Porsche, but the difference between the new and old Cayenne is striking. The onboard computer comes with an easy to navigate touchscreen offering information, a completely restyled cockpit and an optional 1,000-watt Burmester sound system. But it’s the engineering that truly sets the different models apart.

Porsche has opted for a so-called parallel hybrid for the Cayenne, which it claims offers fuel savings of up to 23 percent over the older version (8.2 litres per 100 km or 34.5 mpg) with added benefits likely to appeal to the company’s demanding customers.

The Cayenne S hybrid, priced at €78,636, is normally powered by a supercharged three-litre V6 with direct gasoline injection offering a maximum of 333 hp. An electric motor delivering 34 kW (47 hp) can either propel the vehicle on its own up to speeds of 30 kph (18.6 mph) or it can augment the combustion engine on the motorway. Porsche has dubbed this neat trick “sailing,” when a driver lets off the accelerator to coast using the electric motor at speeds up to 156 kph.

As is to be expected from a Porsche, the sailing experience of the combustion engine shutting off and on while barrelling down the autobahn is seamless.

The option of operating solely on “e-power” at lower speeds, however, is a less satisfying one, as we found the gutsy petrol motor would jump in rather quickly to take over from the electric motor at a stop light.

Of course, drivers opting for a Porsche hybrid are likely to be more concerned about what they’re sitting in than their monthly petrol bill, so we also monitored the sort of figure our ride cut around town.

On a tour around Leipzig, our black Cayenne hybrid clearly failed to impress a pretty blonde on a bike. It did, however, manage to frighten a hippie pedestrian attempting to cross the street. So that would likely be equal honours for most Porsche owners.

But perhaps most importantly for the Stuttgart carmaker, it got the occupants of an older black Cayenne turbo extremely excited.

Pulling up next to us they rolled down the windows and pumped their fists wildly. “Where did you get that?” they asked. They were in awe of the Cayenne’s new design, but less interested by its cutting-edge propulsion system: “That’s a hybrid? Huh.” Then they drove off.

And truth be told, as important as the new hybrid technology is to the future of Porsche, we were also more impressed with how the regular Cayenne S did off-road and how the turbo model dished up a blistering performance on the test track.

Negotiating Porsche’s off-road course in Leipzig in the Cayenne was like having a robot co-pilot sitting next to you. The company’s engineers have come up with an array of James Bond worthy technical gizmos that aid you while driving through rough terrain but manage not to get in the way themselves.

As soon as the driver activates the Cayenne’s off-road mode via a toggle switch on the centre console, the eight-gear Tiptronic transmission switches to a specially tailored gearing for extra traction and a more precise dosage of engine power.

Heading up an extremely steep incline but you need to stop? No problem, the auto-braking function will keep you locked firmly in place without riding the brake pedal. Rolling down the other side is also made easier with “Hill Control,” which will slowly and carefully negotiate the slope for you by adjusting the power to each wheel for optimal traction.

Drivers can also manually adjust the car’s clearance (27 centimetres maximum), which came in handy for us while fording a rather deep water hazard. The Cayenne also managed to effortlessly glide through a road that looked like it had been drenched in chocolate pudding after heavy rain in the morning.

Emerging from the muck unscathed, we turned our final attention to the 500-hp turbo model with a sticker price of around €100,000. Taking to the test track with a professional Porsche driver, he put the two-tonne Cayenne through its paces in a fashion likely never to be repeated by a potential customer.

But perhaps that was our mistake for asking him how much of an improvement the new model was over the old one for sport driving conditions.

“The old Cayenne was good, but this one is a monster,” he said casually.

It was the next lap that he took an S-turn as a succession of lateral sliding with the tyres squealing for mercy. Thankfully gripping the handles on both sides of the passenger seats, we held on for dear life until he calmly drove us back to the Porsche facility.

Tesla's gigafactory outside the doors of Berlin. dpa-Zentralbild | Patrick Pleul

“When I saw on TV that the Tesla factory was going to be built here, I couldn’t believe it,” said Steffen Schorch, driving his trusty German-made car.

The 60-year-old from Erkner village in the Berlin commuter belt has become one of the faces of the fight against the US auto giant’s first European factory, due to open in the Brandenburg region near Berlin in July.

“Tesla needs far too much water, and the region does not have this water,” said the environmental activist, a local representative of the Nabu ecologist campaign group.

Announced in November 2019, Tesla’s gigafactory project was warmly welcomed as an endorsement of the “Made in Germany” quality mark – but was immediately met with opposition from local residents.

Demonstrations, legal action, open letters – residents have done everything in their power to delay the project, supported by powerful
environmental campaign groups Nabu and Gruene Liga.

Tesla was forced to temporarily suspend forest clearing last year after campaigners won an injunction over threats to the habitats of resident lizards and snakes during their winter slumber.

READ MORE: Is Germany’s Volkswagen becoming ‘the new Tesla’ as it ramps up e-vehicle production?

And now they have focused their attention on water consumption – which could reach up to 3.6 million cubic metres a year, or around 30 percent of the region’s available supply, according to the ZDF public broadcaster.

The extra demand could place a huge burden on a region already affected by water shortages and hit by summer droughts for the past three years.

Local residents and environmentalists are also concerned about the impact on the wetlands, an important source of biodiversity in the region.

“The water situation is bad, and will get worse,” Heiko Baschin, a spokesman for the neighbourhood association IG Freienbrink, told AFP.

Brandenburg’s environment minister Axel Vogel sought to play down the issue, saying in March that “capacity has not been exceeded for now”.

But the authorities admit that “the impact of droughts is significant” and have set up a working group to examine the issue in the long term.

The gigafactory is set to sprawl over 300 hectares – equivalent to approximately 560 football fields – southwest of the German capital.

Tesla is aiming to produce 500,000 electric vehicles a year at the plant, which will also be home to “the largest battery factory in the world”,
according to group boss Elon Musk.

In a little over a year and a half, swathes of coniferous forest have already been cleared to make way for vast concrete rectangles on a red earth base, accessed via the already iconic Tesla Strasse (Tesla Street).

The new site still has only provisional construction permits, but Tesla has been authorised by local officials to begin work at its own risk.

Final approval depends on an assessment of the project’s environmental impact – including the issue of water.

In theory, if approval is not granted, Tesla will have to dismantle the entire complex at its own expense.

But “pressure is being exerted (on the regulatory authorities), linked to Tesla’s significant investment”, Gruene Liga’s Michael Greschow told AFP.

In early April, Tesla said it was “irritated” by the slow pace of German bureaucracy, calling for exceptions to the rules for projects that help the environment.

Economy Minister Peter Altmaier agreed in April that his government “had not done enough” to reduce bureaucracy, lauding the gigafactory as a “very important project”.

Despite Germany’s reputation for efficiency, major infrastructure projects are often held up by bureaucracy criticised as excessive by the business community.

Among the most embarrassing examples are Berlin’s new airport which opened last October after an eight-year delay and Stuttgart’s new train station, which has been under construction since 2010.

Brandenburg’s economy minister, Joerg Steinbach, raised the possibility in February that the Tesla factory could be delayed beyond its July planned opening for the same reason.