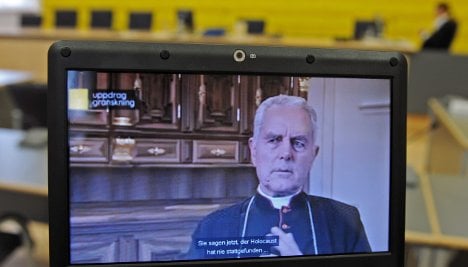 A court in the southern German city of Regensburg convicted Williamson, 70, of inciting racial hatred for stating in a television interview aired in January 2009 that only “200,000 to 300,000 Jews perished in Nazi concentration camps.”

He also denied the Nazis had used gas chambers.

“The statements by the accused represent a denial of the actions taken under the National Socialist regime,” said presiding judge Karin Frahm.

“Bishop Williamson must have assumed that his remarks would draw attention. Williamson knowingly accepted that attention.”

The high-profile proceedings opened Friday without Williamson after his breakaway ultra-conservative Catholic fraternity ordered him not to testify, but he acknowledged the offending comments in a statement read in court.

Williamson gave the interview to a Swedish television crew in Regensburg in 2008, prompting Frahm to rule that Germany’s strict laws against disputing the Nazis’ slaughter of six million Jews during World War II applied to the case.

He was fined €12,000 earlier this year over the same case but refused to pay, which resulted in the trial.

The Saint Pius X Society, a Swiss-based Catholic fraternity, appointed Williamson a bishop without the pope’s blessing after it broke away from Rome over the Vatican II reforms introduced in 1965.

Among the reforms rejected by the organisation was a declaration called Nostra Aetate, which ended a Church doctrine by which the Jews were held responsible for killing Jesus Christ.

Pope Benedict XVI unleashed a deluge of criticism last year for reversing the excommunication of Williamson and three other Saint Pius X Society bishops in a bid to bridge the rift with the fraternity.

Williamson’s interview was broadcast in January 2009, the day after the papal decree lifting his excommunication, but two days before the pope’s decision was made public.

The bishop had also made similar assertions in the past, dismissing records of millions killed in gas chambers as “lies, lies, lies.”

The case prompted a rare comment on religious matters by German Chancellor Angela Merkel, who called on Pope Benedict to “clarify unambiguously that there can be no denial” the Nazis killed six million Jews.

The German pope later admitted mistakes in his handling of the case, saying he was unaware of Williamson’s latest remarks and stressed that it was “intolerable” to dispute the facts of the Holocaust.

The trial comes amid a ballooning sexual abuse scandal rocking the Catholic Church, with hundreds of people coming forward in Germany and other countries around the world saying they were molested by predatory priests. Benedict himself has been accused of turning a blind eye to abuse before he became pope.

Williamson has said he wished to apologise to anyone offended by his comments but has refused to retract his assertions, saying only that he would re-examine the historical evidence.

The court on Friday heard an excerpt of the interview, in which Williamson is heard telling the interviewer: “Be careful, this is against the law in Germany.”

Defence attorney Matthias Lossmann Lossmann read a statement by Williamson in which the cleric acknowledged casting doubt on the Holocaust.

“I was aware that it is against German law to express such doubts, so I expressed these doubts for exclusive broadcast on Swedish television” where such remarks are legal, he said.