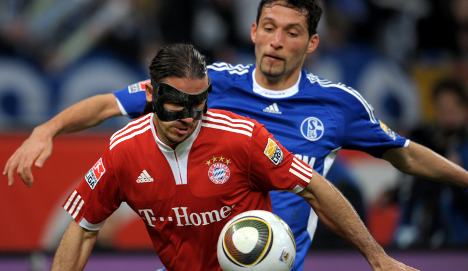 Bayern host relegation-candidates Hanover at Munich’s Allianz Arena on Saturday evening, while second-placed Schalke will be bidding to close the two-point gap with four games remaining against Mönchengladbach.

After this weekend, Bayern face ‘Gladbach, Bochum and bottom-side Hertha Berlin while Schalke take on Hertha, Werder Bremen and Mainz with the season set to finish on Saturday May 8.

“I’m really looking forward to the run-in,” said the Argentine star who is currently wearing a face mask after picking up an injury in his country’s 1-0 friendly win over Germany last month. “This is when we can show what we’re capable of.”

The 29-year-old must wear the mask until the end of the season, but Bayern coach Louis van Gaal will be happy to have him in the side – Munich are undefeated in all Bundesliga and cup fixtures in which Demichelis has started this season.

For Bayern’s game with Hannover, van Gaal is expected to have a full-strength side including the deadly attacking force of Arjen Robben and Franck Ribery with the Champions League semi-final against Lyon looming.

“There are only two teams who have a realistic chance of the title now – Bayern and us,” said the former Munich coach whose side were beaten 2-1 at home by Bayern a fortnight ago. “We are the only team who can still deny Bayern.”

Schalke 04 have Brazilian defender and former captain Marcelo Bordon back in defence after missing last week’s shock 4-2 defeat to Hanover while striker Kevin Kuranyi will be looking to add to the six goals he has scored in the last six games.

With Bayern facing Lyon in the last four of the Champions League, Magath says Munich’s home and away fixtures against the French side could play into his team’s hands by acting as a high-profile distraction.

At the other end of the table, five teams are battling to stay in the Bundesliga with Hanover, Freiburg and bottom side Hertha currently in the bottom three wih Nuremberg and Bochum hovering just above.

Berlin are six points from safety and will be desperate for points at Eintracht Frankfurt on Sunday. Both Serbian midfielder Gojko Kacar and Brazil striker Raffael are facing battles to be fit, Kacar with a knee problem and Raffael with a hand injury.

Second-from-bottom Freiburg host Nuremberg in a real relegation dog-fight and the guests will be buoyed by last weekend’s 2-0 win over last season’s champions Wolfsburg.