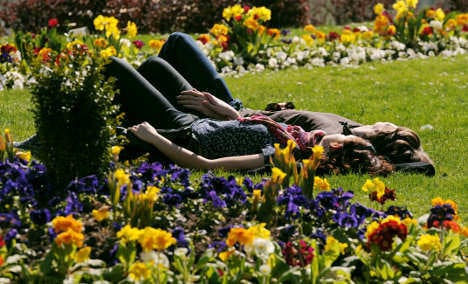 By Sunday temperatures could reach as high as 20 degrees Celsius, though northern Germany will remain a bit cooler.

Friday will be mostly clear and dry, but southern regions along the Danube River could see a few raindrops, the DWD said in a statement. Highs will top out in northern Germany between nine and 13 degrees, while the south will be a bit warmer between 11 and 15 degrees.

But temperatures will drop dramatically overnight due to clear skies.

“In many places the clear nights will send numbers into the cellar, so that in some areas even ground frost or light frost can be expected,” meteorologist Ansgar Engel said.

Daytime temperatures will warm up on Saturday thanks to ample sunshine, though. Highs in the north will reach up to 11 degrees, while the southwest will likely see a balmy 17 degrees Celsius.

Sunday will be even warmer with widespread sun, though some showers may arrive by evening. Northern highs will reach between 12 and 16 degrees, while southern regions can hope to bask in temperatures between 15 and 20.