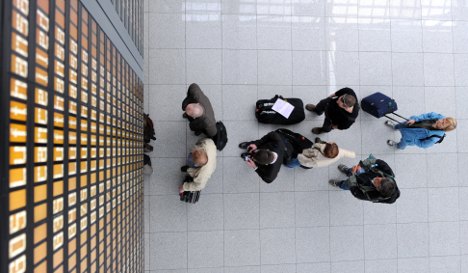 The ash made for a spectacular sunrise at the Hannover airport. Photo: DPA

The Bavarian capital’s airport was to stop operations starting 8 pm German time, shutting the only remaining international hub in Germany.

No flights were landing or departing from the Frankfurt airport – the biggest in Germany and the centre for Lufthansa’s worldwide operations. All German airports would remain closed until 8 am on Saturday, air traffic officials said.

But a spokesman for Lufthansa said all of the airline’s flights in Germany would be grounded until at least noon on Saturday. Only then would officials determine if it was safe to fly.

“The concerned passengers are asked not to go to the airport,” Lufthansa said in a statement.

The ash floating thousands of kilometres from Iceland’s Eyjafjallajokull volcano has also forced the unprecedented closure of airports across Europe.

The European Organisation for the Safety of Air Navigation (Eurocontrol) said in a statement it expected around 11,000 flights on Friday in European airspace, down from the normal 28,000.

Besides the airports closed in Germany, airspace is not open to civilian aircraft travel in Ireland, the UK, Belgium, the Netherlands, Denmark, Sweden, Norway, Finland, Estonia, the north of France including all Paris airports, and parts of Poland including Warsaw airport, Eurocontrol said.

It remains unclear when conditions will improve enough to resume air traffic in the region.

Radar images from the German Weather Service show the ash cloud moving south, spokesperson for Germany’s DFS air traffic authority Kristine Kelek told news agency DPA. But there is currently no news on whether southern airports including Munich may also have to shut down, she said.

Experts believe that the ash could cause aircraft engine failure, adhering to moving parts and causing them to seize up.

Meanwhile the volcano in southern Iceland continues to belch ash and smoke into the atmosphere, forcing hundreds of nearby residents to evacuate, the country’s foreign minister said late on Thursday.