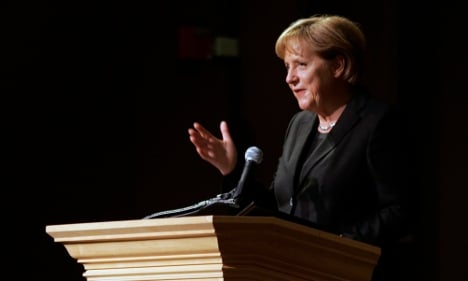 During a speech at Stanford University in San Francisco, Merkel said she respected concerns about the worsening situation in the strife-torn country, but insisted that the mission must succeed in stabilising Afghanistan until it can provide for its own security.

After asking several hundred people in the university hall to take a moment of silence for their deaths, Merkel said that the four soldiers who died in a Taliban attack on Thursday did so for “a mission that guarantees our freedom and security.”

The chancellor also called for international cooperation to fight the problem of terrorism.

“Our freedom now more than before depends on us aligning our security policy with global needs,” she said.

Meanwhile Defence Minister Karl-Theodor zu Guttenberg, who was informed of the attack on Thursday just after landing in Uzbekistan following a two-day Afghan visit, said he plans to fly back to Germany with five soldiers who were also wounded in the attack on Friday. They are all said to be in stable condition.

Bundeswehr soldiers in Mazar-i-Sharif will conduct a memorial service for the fallen soldiers on Sunday.

The attack came just a few weeks after three other Bundeswehr troops died in an attack on Good Friday.

The recent bloodshed in the country has renewed debate over military policy in Afghanistan and whether the Bundeswehr is being properly outfitted and trained for the NATO mission. It has also prompted Chancellor Angela Merkel’s government to break a long-standing taboo and call the conflict a “war.”

Germany has participated in the conflict in the Kunduz regions since 2002 as a member of NATO’s International Security Assistance Force (ISAF). There are currently more than 4,500 troops serving in the mission. The bloodshed this month has brought the number of German soldiers killed in Afghanistan to 43.

During his tour of Afghanistan Guttenberg had announced a speedy upgrade to Bundeswehr weaponry in response to escalating violence in the region – saying Germany had fast-tracked an order for 60 new Swiss-made Eagle IV armoured vehicles – the same vehicle involved in Thursday’s deadly attack.

Soldiers had reportedly claimed before the Good Friday ambush that they were short on armoured vehicles – and the latest attack is certain to add to the growing sense of urgency at the Defence Ministry for new hardware for Berlin’s troops.