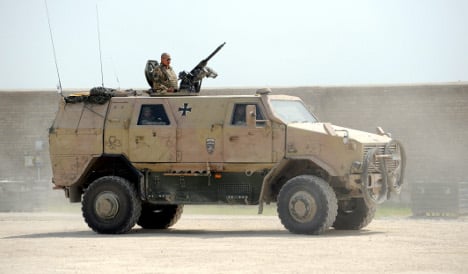 A file photo of Bundeswehr troops in Afghanistan. Photo: DPA

According to officials in Berlin, a patrol between Kunduz and Baghlan came under attack around 2:30 pm local time. Anti-tank missiles or rocket-propelled grenades reportedly struck an armoured Eagle IV vehicle near a bridge in the area, which is a known Taliban stronghold.

Defence Minister Karl-Theodor zu Guttenberg was informed of the attack just after landing in Uzbekistan following a two-day Afghan visit. He said he was “deeply saddened” by the news and that he and military chief of staff Volker Wieker would return to the northern city of Mazar-i-Sharif “to be with our soldiers.”

The attack came just a few weeks after three other Bundeswehr troops died in an attack on Good Friday.

The Bundeswehr paratroopers – aged 25, 28 and 35 – were shot during a fierce battle against insurgents in the Chahar Dara district southwest of the city of Kunduz. Eight other soldiers were injured in the fight, four of them seriously.

The recent bloodshed in the country has renewed debate over military policy in Afghanistan and whether the Bundeswehr is being properly outfitted and trained for the NATO mission. It has also prompted Chancellor Angela Merkel’s government to break a long-standing taboo and call the conflict a “war.”

Germany has participated in the conflict in the Kunduz regions since 2002 as a member of NATO’s International Security Assistance Force (ISAF). There are currently more than 4,500 troops serving in the mission. The bloodshed this month has brought the number of German soldiers killed in Afghanistan to 43.

During his tour of Afghanistan Guttenberg had announced a speedy upgrade to Bundeswehr weaponry in response to escalating violence in the region – saying Germany had fast-tracked an order for 60 new Swiss-made Eagle IV armoured vehicles – the same vehicle involved in Thursday’s deadly attack.

Soldiers had reportedly claimed before the Good Friday ambush that they were short on armoured vehicles – and the latest attack is certain to add to the growing sense of urgency at the Defence Ministry for new hardware for Berlin’s troops.