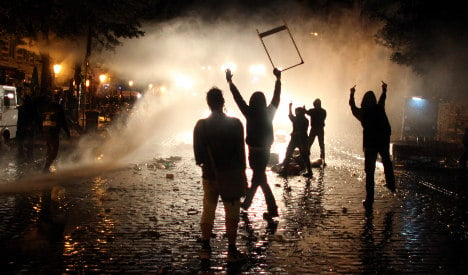 The expected wave of left wing extremism “will become more violent than in previous years,” Konrad Freiberg, the chairman of the Union of Police (GdP), told the Leipziger Volkszeitung.

Recent Interior Ministry figures showed that the number of left-wing extremist crimes climbed to 9,375 last year, a 39.4 percent rise on the previous year. Among those were 1,822 violent offences – a rise of 53.4 percent on the year before.

Freiberg said that in addition to the increasingly boisterous left, right-wing extremists were also a major worry. Clashes between the two sides will be a serious danger, he said.

“We are extremely worried that it could come to hundreds of injuries around May 1st this year and, hopefully not, even to one or two deaths.”

May 1st, often known as May Day, is the traditional day of protest for leftists and has traditionally led to violent clashes between protesters and police, particularly in the Berlin districts of Kreuzberg and Friedrichshain.

With protests planned in cities across the country, staff cuts to police forces mean that Berlin in particular will have trouble deploying enough police personnel, Freiberg said.

“The country is short everywhere,” he said. “In the face of manpower crises in the police, we have to expect security gaps. These gaps will become apparent on May 1st. The police are, on the whole, no longer in a position to properly manage these large scale operations everywhere at once.”

On days such as May 1st, Germany will be short by “thousands of police,” he said.