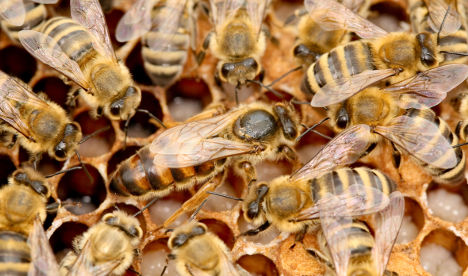 Experts say the winter beehive losses were twice as severe as normal, the report in daily Süddeutsche Zeitung said.

Manfred Hederer, head of the German Professional Beekeepers Federation, said he had lost about 20 percent of his own bee stocks during the winter in the Ammersee region of Bavaria.

“In many hives, nothing was moving – all the bees were dead and the ground was strewn with bodies,” he said.

Nearly one in four beehives did not survive the winter, according to a survey taken by Ruhr University Bochum.

Some 60,000 bee colonies were lost according to a survey of 3,600 apiarists, with the problem particularly acute in southern Germany. This means the national a death toll was up to 200,000 beehives for the winter, the paper said.

The main cause appears to be parasitic mite called the “Varroa destructor,” which feeds on the insects’ blood and carries disease.

The problem could have a major impact for the rural economy in the south, where bees are the most important producers after beef cattle and pigs. They are also vital for pollination – meaning the destruction of bee colonies could have a dramatic effect on the productivity of crops.

“The problem years are becoming more frequent, and are affecting greater areas,” said Peter Rosenkranz, who heads the State Bee Institute at the University of Hohenheim. “It should be added that the colonies that survive are weaker than normal.”

One possible explanation for the rise in the Varroa parasite could be the early start to spring last year, which gave the parasite more time to establish itself in the warmer months.

On top of this, the common practice of monoculture cropping – the planting of just one kind of crop – means the bees are less able to find nectar upon which to feed.

“The bees are suffering a food shortage,” Hederer said.