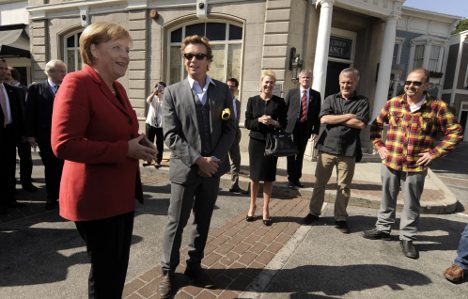 Merkel used her visit to the west coast – the first by a German chancellor since Helmut Kohl in the 1990s – to push the need to build smarter industries and grow the technology sector through stronger ties with places such as Silicon Valley.

“I believe it’s important to visit the west coast even once and not just always turn to the east coast,” Merkel said at a meeting in Los Angeles with Mayor Antonio Villaraigosa.

The one disappointment was the no-show by Hollywood stars Bruce Willis and Nicole Kidman at Villaraigosa’s welcoming lunch for the chancellor at the Paul Getty Center. However, Kidman’s compatriot, fellow Australian and star of the US TV series The Mentalist, Simon Baker, did take time to show Merkel around the Warner Bros studio.

Merkel was to bring her four-day visit to the US, which also took in President Barack Obama’s nuclear security summit in Washington, to an end with a visit to San Francisco on Thursday. There she was to address students and staff at the elite Stanford University and visit German technology firms based in Silicon Valley, the hub of the US tech sector.

Merkel said California – which if it were a country would have the world’s eighth largest economy – was an ideal partner for Germany, not just for business, science and artistic relationships but also as a headquarters for building a relationship with Asia.

California was an “open land” characterised by “global thinking,” she said.

“We can quite dramatically build our relationships here.”