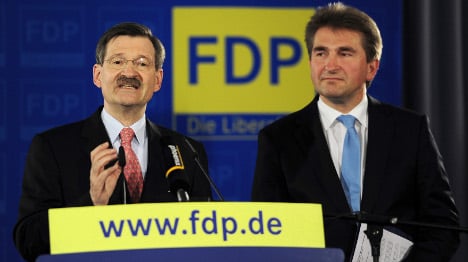 Tax reform has been a key political priority for the pro-business FDP, but the party has been forced to back away from campaign promises of €35 billion in tax cuts made last year due to the government’s grim finances.

“These large reform goals won’t come all at once, rather step-by-step,” said FDP finance expert Hermann Otto Solms. “We aren’t backing away from our plans at all.”

He said the FDP now wanted tax relief of €16 billion starting in 2012 while streamlining income taxes to just five brackets. The party argued this would alleviate so-called bracket creep that occurs when wages are adjusted for inflation but tax rates are not, potentially pushing taxpayers into a higher bracket.

Ahead of last September’s general election, the FDP had suggested just three tax brackets of 10, 25 and 35 percent, but the party has felt pressure from Merkel’s conservative Christian Democrats to take a less ambitious approach to tax reform owing to Berlin’s dismal fiscal situation. Following the worst recession since World War II last year, parliament adopted the 2010 budget in March with a record level of new debt – €80.2 billion.

“We’re proposing something realistic and within the realm of possibility,” said FDP deputy chairman Andreas Pinkwart, adding the party planned to sign off on the proposal at a conference in two weeks.

But Frank-Walter Steinmeier, the parliamentary leader of the centre-left opposition Social Democrats said the FDP was trying to grab into its “fiscal policy bag of tricks” in the hope of influencing a state election in North Rhine-Westphalia next month.

“Afterwards, tax cuts will be that much more expensive and paid for by higher fees, fewer day care centres, closed public swimming pools and libraries,” he said.